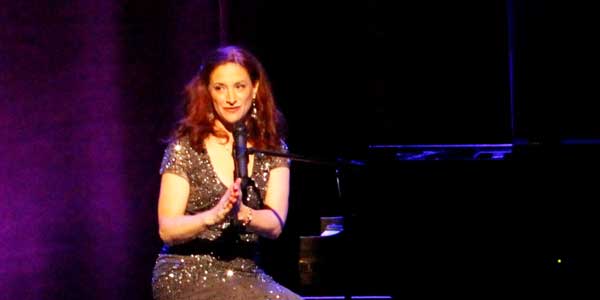 The holidays are a time when people come together – they travel across the country to be with loved ones, they cook elaborate meals, exchange gifts with one another.  And, when the opportunity presents itself, they sit in a theater, along with other enthusiastic patrons, singing along to much beloved holiday songs!

If you love the songs of the season, then this is your chance to join host and Steinway Artist, Robin Spielberg, in a touching sing-a-long filled with holiday favorites!

Robin Spielberg’s prolific career has spanned over two decades.  Since she became a pianist she’s recorded 17 studio albums, appeared on more than 40 compilations around the world, and has sold hundreds of thousands of albums world wide.

Known for her beautifully expressive lyrical content and warm stage persona, Robin is beloved on stages and in concert halls across the country.  She’s appeared on ABC News, CBS Saturday Morning, Lifetime Live, and the Great American Ballroom Challenge. She’s also given her own TedX talk about the healing power of music.

From the Acting Stage to the Concert Stage

Piano is Robin’s great musical love, but she is also a trained actress.  She attended NYU’s theater program, and was one of the founding members of the Atlantic Theatre Company.

Though she loved every aspect of performing, once she was cast in her first official role, she found that the life of a theater actor was not for her.

“What happens when the thing that you wished for happens, and it’s not what you thought?  Then what? Do you live your life kinda faking your way through? Or are you truthful with yourself?  I got a part in a play at Lincoln Center, and while all the elements came together, I wasn’t so crazy about my day-to-day.  The whole process of auditioning and competing for roles was not fun. I loved the end result, but the reality was that you need to have joy in your life, in your every day,” Robin said.

While she was a student, she supported herself by playing piano for restaurants, hotels, and clubs.  She realized that playing piano brought constant joy to her everyday life, and when she was offered a record deal, she took it and never looked back.

But those years of acting training proved to be a tremendous help in the next stage of her life.  When she played piano at a restaurant or bar, she learned to read the room and connect with the audience.

“You really had to evaluate the room.  Sometimes you could tell when Broadway hour was coming, and people were getting ready to go to the show, and you knew what was hot on Broadway and what show they might be going to, so I’d play a few songs from the show.  I learned how to pick up on the queues of the people in the room and play to what they wanted,” Robin said.

She created a stage piece that was much different than that of other concert pianists.  Her show was theatrical, consisting of more than her simply coming to the stage, bowing, and playing the music.  She talked to the audience, connected with them. Before she knew it, she was booked and living a joyful life doing what she loved most.

Just after Robin had signed her very first record deal with a small label (back in the early 90s), she was approached by one of the executives about recording an album of holiday songs.  She told him, “You know I’m Jewish, right?” and he said, “Great! You’ll have a whole fresh take on the music! Will you do it?”

“Sure!” she replied.  She got right to work choosing the songs, and recorded her first holiday album The Spirit of Christmas.  It quickly became one of her best-selling albums, and over the years she’s recorded two more albums of Christmas songs, and one of Hanukkah songs.

“My grandmother from Brooklyn asked me why I was recording Christmas songs instead of Hanukkah songs, and I said, well, there’s not much out there!  She told me to come over and she’d teach me songs she knew. I went all the way to Brooklyn to visit her, and she sang these beautiful songs in Yiddish and Hebrew, some from Eastern Europe, that she learned in her childhood.  I made an album out of those songs, and it’s one of my favorites,” Robin said.

And from those albums evolved her Holiday Sing-a-long show!  Robin found that when she played holiday music at shows, people couldn’t help but sing along as she played.  So now she’s incorporated a video element, reminiscent of the breaks between cartoons where kids would “follow the bouncing ball” and sing along, to encourage the audience to join in.

“I want people to walk away from this show with joy!  Sing along if you want, or sit and enjoy the music. Don’t feel bad either way – singing or not.  This is a show you’ll walk away from, smiling,” Robin said.

Bring the whole family to celebrate the joy of the season by singing along to traditional holiday songs and winter favorites!  The Holiday Sing-a-Long is on Friday, November 30, 2018, at 8:00 pm.

Audience members of all ages will love hearing Robin’s stories, singing along to their favorite seasonal songs, and watching concert footage.

Get Tickets for the Holiday Sing-a-Long!