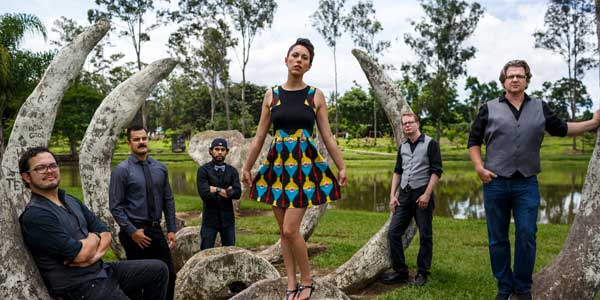 There are some artists whose music crosses boundaries and defies genres. They create catchy songs and memorable music, and, though many elements of each song may sound familiar, they don’t quite fit into any one box.

Gina Chavez is one such musician. Her multi-ethnic pop songs nestle comfortably into your ear, feeling both familiar and brand new at the same time. And that’s just the way she likes it.

“I think I just describe my music as fusion, because it really is, there’s nothing puro, or completely pure. I started off as a singer songwriter and got inspired when I went to Argentina for a study abroad semester in college, becoming enthralled with a specific kind of rhythm from Argentina called chacarera. That essentially started me on a journey to discover my latin roots through music. Then my most recent album has elements of soul and R&B even though I wouldn’t call it a soul record. I like to do my thing and leave it up to the fans to define it for themselves,” Gina told TOCA Executive Director Chris Wolf.

Though Gina makes bilingual albums, she didn’t grow up speaking Spanish at home. But there was always a high value placed on language and learning about different cultures.

Both of Gina’s parents spent a lot of time traveling when they were young. They toured through Europe in the 70s, hippie style, living in a VW bus as they went from country to country, picking up bits of culture and language along the way.

“I grew up hearing stories about my mom and dad traveling, learning bits and phrases from Holland or Morocco, and all kinds of stuff. That’s really what I soaked up. A desire to travel the world. I didn’t grow up speaking Spanish, or with my latin roots (or my Swiss German roots). Music was really the doorway to that world,” she said.

Gina had always sung as part of a choir during her school years, and picked up the guitar in her late teens. Rather than trying to learn how to play other people’s songs, she decided to simply start writing her own. She leaned into being a folk singer songwriter, but a trip to South America slightly changed her trajectory.

Filled with the desire to find her roots, Chavez decided to travel to Argentina as part of a study abroad program in college. It was there that she discovered new languages and music, and she fell in love with a type of Argentinian folk music – chacarera.

“That’s how it started. I had been playing guitar for a few years and had been writing songs in English, but then I went to Argentina, and almost immediately when I got back home, I wrote the only song that has ever taken me 10 minutes to write – in Spanish. It was my version of a chacarera rhythm, and that was the one song that everybody seemed to enjoy, that they seemed to connect to. So I thought ‘I love that stuff too, maybe I should focus there’,” Gina said.

And that’s exactly what she did. Her sophomore bilingual album Up.Rooted went to the tops of the Amazon and iTunes Latin charts, and it also won Album of the Year at the 2014-15 Austin Music Awards. That same same year, Gina herself won Musician of the Year.

Gina is using her musical talents to do more than wow crowds and win awards. She, along with her wife Jodi, started a charity called Niñas Arriba. Their goal with Niñas Arriba is to send young women living in poverty-stricken parts of El Salvador to college.

“Before we were married, my wife and I went to el Salvador to do some volunteer work. After living with these incredible young women, with nuns, in a convent, and seeing what the people who live there have to deal with… it felt really wrong to just leave at the end of our time there. My wife suggested that we start a college scholarship fund. We had found out that all the young women we had been teaching wanted to go to school, but they couldn’t because it’s incredibly unaffordable. We got back and decided to raise money doing benefit concerts. Fast forward eight years, we now have put four women through college, and we are trying to put another cohort of women through college. We’re really excited to continue the program,” Gina said.

More than anything Gina hopes that the audiences from her shows connect with the message of her music: that we don’t all fit in the same box, and yet we do share so much common ground.

“I want people to understand that we don’t fit in a box. There’s so many different sides to each of us…We all want to be loved for who we are, and we want to be able to share who we are with the world…So that’s what I want to do with music. I want to look out at an audience who may not talk to each other because of the differences that divide them…but they’re experiencing the same thing, together, live. And that’s because we’re the same, we have something in common.”

“I’m hoping that people leave with a little joy in their hearts, a realization that we’re not always what we seem,” she said.

Gina Chavez’s performances are part of the Studio Cabaret Series at TOCA. The Studio Cabaret Series is a way to enjoy musical talent and tasty food in an intimate setting; it’s like dinner theater for your ears! The performances are set in the George Nakano Theatre at four-seat cocktail tables. Meals for the Series this season are prepared by the talented chefs at the Red Car Brewery.

Dinner for the performances of Gina Chavez will be chicken enchiladas, Southwest salad, and chava rice. Plus goodies from the always-delicious Torrance Bakery will be available at intermission.

Gina Chavez and her special brand of folk-pop-latin music will be at the Nakano Theatre on March 1 & 2 at 7:30 pm. Tickets are still available, you won’t want to miss this performance!

Get Tickets to Gina Chavez