All About that Casey Bassy 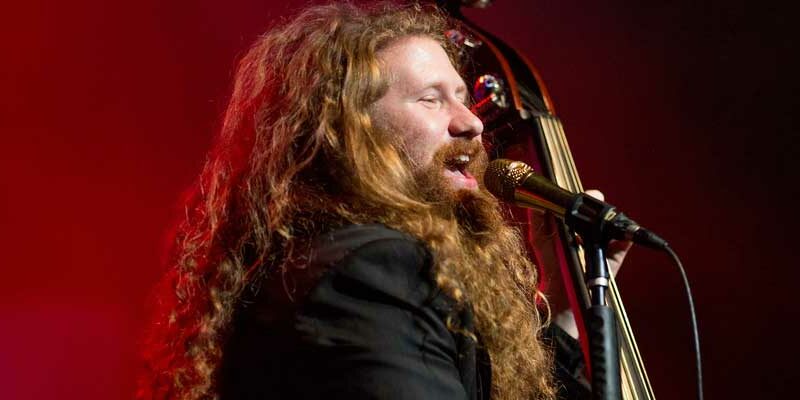 Get tickets to see Casey Abrams on November 4th by clicking here!

If you watched the 10th season of American Idol you might be familiar with the name Casey Abrams.  You might have even voted for him!

Or, maybe you’re a fan of musical time machine Postmodern Jukebox and you’ve heard Casey’s renditions of “Stacy’s Mom”, “Sweet Child O’ Mine”, or “What is Love”.

Or, maybe you stumbled upon his YouTube channel and watched his Orchestra of People video series, or…

No matter how you first learned about the amazing talent contained in one bearded, wild-haired guy, chances are you’ve come to love him.  His enthusiasm, passion, and unbridled joy while performing – regardless of whether he’s on stage or around a campfire – are infectious.  The audience can’t help but be charmed by his humorous antics and sheer delight at doing what he loves.

While he approaches his shows with a definite sense of humor and goes with the flow, he is very serious about his music.  From live recordings of original songs, to touring around the world, Casey wants to bring his music to as many people as he can.

We had the chance to speak a little more in depth with Casey to learn about what he’s been up to and what we can expect in the future.  Here’s what he had to say:

Q: How did you first get into music?

CA: Music was always around our house, always playing, and I’d sing along to all the harmonies in Beach Boy songs.  Then I decided I wanted to take piano lessons because I’d figured out how to play the Pokemon theme song on the piano, so I thought I should pick it up!

In high school I switched from the piano to the upright bass and started learning that, but I tried new instruments all the time.  I mean, I had ADD so I would just pick up instruments and start playing them!  I had access to a jazz room and that was it for me.

Q:  What is Orchestra of People?

CA:  Oh, yeah, I just got a bunch of people together to play or sing, turning voices into an orchestra.  We did some videos of that a while ago, and we’re bringing it back, but bigger!  Recoding a whole bunch, making a series out of it for a big network.  I can’t really give a lot of details, but we’ll have special guests, some from the pop world, from the PMJ [Postmodern Jukebox] world.  Don’t know if it will be next year or the year after that, but we’re working on it!

Q: How often are you touring with PMJ?

CA:  PMJ has tours that go out all the time, I’ll join them sometimes.  I’ll be going to Morocco, Italy, France, and Germany with PMJ in December for a couple of weeks and I do one-off dates with them when I can.

Q:  What have you been working on lately?

CA:  I just recorded and released a live album called Casey Abrams Live.  I liked recording live because it really captures the feeling, the atmosphere.  Not just the notes.  Some people use too much autotune.  A bit ago I recorded something live and the mixer took all the “jankiness” out of the piano and it sounded like a produced record rather than performed live.  I didn’t want that at all with my live album.

Q:  What can the audience expect from your upcoming show at the Torrance Cultural Arts Center?

Q:  What else do you have coming up in the future?

CA:  Zombie movie.  That’s all I can say about it.

If those who wish to sing always find a song, then Casey Abrams will never be without music.  His immense talent with multiple instruments and styles will ensure he always has a project in the works and a place to play.  Don’t miss your chance to see him in action!