Behind the Documentary Freedom Writers: Stories from an Undeclared War 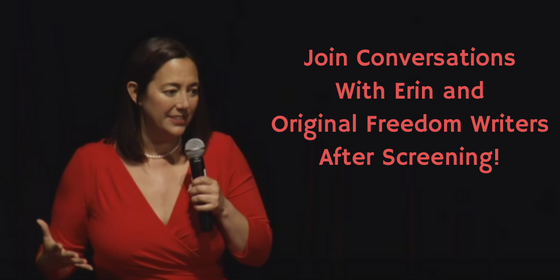 You may have heard of the Freedom Writers from Wilson High in Long Beach. Their story was made into a major motion picture starring Hilary Swank in 2007. But, of course, there’s more to the story than can be edited into a two hour time frame.

That’s where the documentary Freedom Writers: Stories from an Undeclared War comes in. This documentary goes more in depth about the people, events, and stories, putting names and faces to the 150 Freedom Writers. Twenty years in the making, Stories from an Undeclared War follows the original 150 students from their first day of high school in 1994 until today.

A True Story of 150 Students and an Ordinary Teacher

It tells the tale of Erin Gruwell and the journey she took with her students, getting them to put down their fists, spraycans and guns – and pick up a pen instead. Fresh out of college soon after the 1990’s LA riots, and eager to take on the world, Erin took her first teaching job at Woodrow Wilson High School in Long Beach. She was given a class of 9th graders who everyone else had written off as unteachable and untouchable.

By choosing works of literature that were written by teens and which closely mirrored their own experiences, Erin was able to capture their interest and break down walls they had spent their lives building. “I chose great storytellers who were survivors to inspire my students to take their own stories and write them down,” Gruwell said during an interview at Chapman University.

Because of the safe space she created in Room 203, her students began to write anonymously about their own struggles with abuse, violence, drugs, and incarceration. They formed an unlikely and diverse family, accepting of each other’s differences and taking the name Freedom Writers after the 60s Civil Rights activists.

An Approach that Worked

Despite setbacks and a lack of support from her colleagues, Erin’s approached worked. All 150 of her students graduated from high school with many of them going on to pursue higher education and attain lucrative careers. And at a time when these at-risk kids weren’t expected to make it to the end of 9th grade, the fact that every one of her students graduated was remarkable.

Inspired by her success of her students, Erin created the Freedom Writers Foundation, a non-profit organization that provides teacher training, student scholarships, outreach programs, and visits schools. According to the website, “The mission of the Freedom Writers Foundation is to be an advocate for all students and teachers by providing tools that facilitate student-centered learning, improve overall academic performance, and increase teacher retention.”

These days Erin Gruwell and several of her former students are touring with the documentary, speaking after viewings and doing Q & As with the audience members. To learn more about the Freedom Writer’s Foundation and how you can help them make a difference in the lives of teachers and students, read more here.

To get tickets to the Torrance Cultural Arts Foundation screening of Freedom Writers: Stories from an Undeclared War and after-screening panel with Erin Gruwell and some of her original students!