BOOM! An Explosive Look At the Baby Boomer Generation 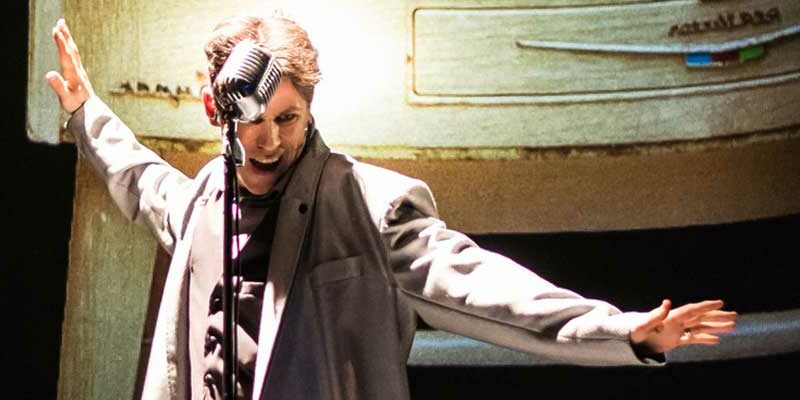 It started in 1945 with the end of the Second World War, and continued through the most turbulent 25 years of any period in modern history. It was a time of social and political upheaval, and a time of great technological advances that took a man all the way to the moon. And a time of great unrest.

The generation born of these turbulent times became known as the Baby Boomers, and the solo show about the 25 years between 1945 and 1969 is called BOOM.

Created, written, directed, and performed by Rick Miller, BOOM is a show that almost defies explanation. But according to Rick, it’s “a love of history and politics and how those two things connect through music. There’s a lot in BOOM but I’d say at its heart it’s like a documentary about the Baby Boomer generation and how it continues to influence our society today.”

After having created other successful solo shows like MacHomer, Bigger Than Jesus, and Hardsell, Rick was ready to bring another one of his passions to the stage: the history of his parents’ generation. But this show is more than a retelling of the events of those years.

“A lot has been written about the baby boom, a lot of documentaries and such, so I had to present something that hasn’t been said before, hasn’t been done. It’s not that there hasn’t been another documentary, maybe even on stage, but I’m alone doing it, and in a way I’m inhabiting a kind of time capsule up on stage that I’m bringing to life all by myself. With technicians and multimedia, I’m playing 100 different characters from that generation,” Rick said. “I play all the singers, from the crooners to Janis Joplin and David Bowie.”

But this is not simply a musical review of the era, Rick was careful to note. “Through the experience of watching one person go through this, it becomes an event, a live theater performance, and it wouldn’t be the same on film. It’s really something to watch all of this happen. And yes, it’s exhausting, but in a thrilling way,” he said.

In an era chock full of personalities, political figures, civil rights figures, musicians, and icons, choosing 100 people to represent the events of a generation wasn’t easy. Some of the decisions were fairly simple; if Rick couldn’t get the rights to a song, then he moved on. But other choices weren’t so easy. One thing was clear, however: Rick wanted to connect the dots between people and events over time in a way that hasn’t been done before.

“I decided to make it a documentary about my parent’s generation. Specifically I play a trio of people, and it’s a story about these people where you’re not sure how this kid from Austria, a man from Chicago who grew up in the civil rights movement, and this woman from a small-town in Canada, converge. But they end up coming together at the end of the play in a meaningful, but unexpected, way,” Rick said.

He continued, “In a way it’s the DNA of my generation, of Gen X. It was the DNA of our culture. Certain things happened in the 60s that were because of peace and affluence and technology and just the spirit of what was going on in the world. It was really built around one movement that people really felt attached to.”

What fascinated Rick the most, and what he wanted to highlight in the performance, was the connections between events and music.

“I think of music and politics during this time in history as a kind of DNA double helix, where they were always connected to each other without, you know, touching each other, maybe more than any other time in history. Nowadays there’s a lot more choice and the wonderful political stuff doesn’t always make the airwaves,” said Rick. “People are getting more of what’s just a ‘hit’ and that’s often more of a distraction as opposed to something that connects people around a revolution.”

Another interesting aspect of the BOOM show is the way Rick has integrated technology into his performance.

“I knew I wanted to be immersed in media, but not have it like a TED Talk. I didn’t want a giant screen behind me, so we thought of using a screen, which is a theatrical fabric, a wire mesh. Our set is basically a cylinder that sometimes disappears, sometimes is entirely filled with images. So sometimes it’s very high tech, other times low tech, but the idea is that your source for getting this info is one person,” Rick explained. “And I’m in there doing whatever character I’m doing, and it’s just following this story that happens to be very entertaining.”

If you lived through the Baby Boom years, or know someone who did, this is a show you need to see. Not only will you get a new perspective on well-known events, but BOOM tends to spark conversations between generations.

“Come with a member of your family of a different generation so that they can share stories after the show. I always do a talk back after the show, where I come right back out on stage and listen to members of the audience share their perspective or what they remember from the time,” said Rick.

From the first “boom” of an atomic bomb, to the historic Apollo 11 landing on the moon, BOOM merges politics, culture, and generations like nothing you’ve ever seen before.