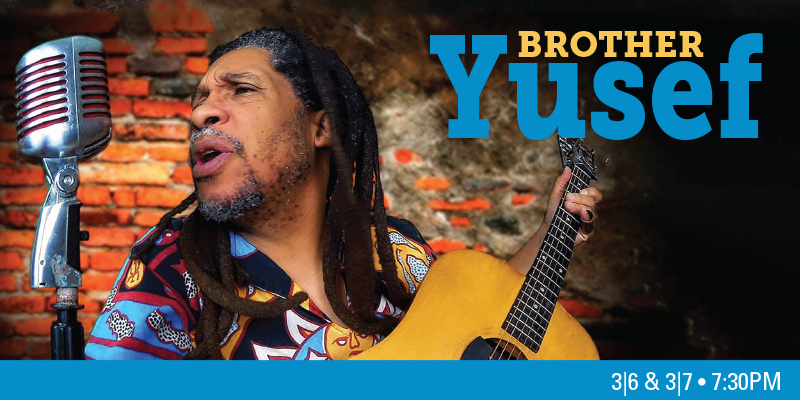 A man sits alone on stage, guitar across his chest, fingers picking, strumming, thumping in time to the music he plays. Eyes closed, his dreadlocked head sways back and forth as he fills the room with his soulful voice and music that seems to reverberate from the depths of his soul.

The music he plays is the blues; the musician, Brother Yusef, is a master solo guitarist and originator of the “fattback blues.”

The musical genre we now know as the blues first came about during the late 1800s. The blues originated in the deep south, the Mississippi Delta, from the songs of African American sharecroppers who sang spirituals, African chants, work songs, field hollers, revivalist hymns, and more.

But it wasn’t until the 1930s or the 1940s that the blues spread out of the Mississippi Delta into the more populated, urban areas of the country. Once it was out of the Delta, the blues evolved into new and exciting forms. Electrified Chicago Blues, jazz-blues hybrids, country blues, jump blues, and boogie woogie, eventually evolving into rhythm and blues and giving birth to rock and roll.

Despite being called “the blues,” a name synonymous with sadness or feeling down, this music is not entirely meant to be sad; it’s also a music of celebration and survival.

“Everywhere I go I just like to make it clear that first of all blues is not a sad music. It’s a music that was created by African-Americans for the purpose of healing and seeking freedom, which should be obvious, but for some people it’s not…That’s my message whenever I go around performing and when I talk to people about it, that’s what I’d like people to understand about this music, because it means so much to me, especially as an afro Afro-American man,” Brother Yusef told thecountryblues.com in 2012.

Surprisingly, Brother Yusef did not grow up with a guitar in his hands. He was fully grown before he picked up the guitar for the first time.

He was born Yusef Hopkins-Olaitan in Bakersfield, CA, in the early 1960s. In 1967 he and his family moved from Central California down to Southern California, ending up in Altadena, where he still resides to this day.

He grew up listening to his parents’ R&B records, Marvin Gaye and Aretha Franklin among his favorites. He remembers how watching the Jackson 5 on the Ed Sullivan show turned his world upside down, igniting his desire to learn to play guitar.

“While everybody else was watching little Michael, I was watching Jermaine and Tito on guitar. I fell in love with guitar music,” he told the Santa Maria Times in 2015.

He asked his parents to buy him an electric guitar but instead they insisted he learn how to play piano. For two years he accommodated their request, plugging away at piano lessons though the guitar was his true love. At 19 he bought his first electric guitar and taught himself how to play by listening to old blues records – and he’s been playing the blues ever since.

And while he does play traditional blues songs during his shows, he always puts his own spin on them. Something he’s called “fattback blues” for many, many years.

“Fattback’s, of course, from the south, a flavor…I grew up in the 70s and I grew up on funk music. It’s almost like a funk approach to blues where it’s just really edgy, hardcore, really in your face. You think of James Brown, you think of Bootsie Collins, all that stuff where the music is just really in-your-face, no-holds-barred; that’s the way I approach my music, especially as a solo artist,” he told oldcountryblues.com.

With six studio albums to his name, Brother Yusef plays original compositions and some covers that he puts his own spin on. He likes to take well-known songs and really make them his own. For several years he’s played at the House of Blues in Anaheim and all over Orange County, even traveling the world to share the blues with music lovers in other countries.

Now South Bay residents have the chance to experience the “organic, greasy” sound of Brother Yusef’s Fattback Blues – right in their own backyard.

Brother Yusef is coming to the Nakano Theatre as part of our Studio Cabaret Series. The Studio Cabaret Series is a way to enjoy musical talent and tasty food in an intimate setting; it’s like dinner theater for your ears! The performances are set at four-seat cocktail tables, and gourmet meals are available for an additional cost. Meals for the series this season are prepared by the talented chefs at the Red Car Brewery.

Dinner for the performances of Brother Yusef will be southwest salad, chicken enchiladas, and chava rice. Plus, goodies from the always delicious Torrance Bakery will be available at intermission.

Come experience a true blue original! Brother Yusef will be performing on Friday, March 6, and Saturday, March 7, 2020, at 7:30 pm. Tickets are on sale now, so don’t miss this opportunity to experience the fattback blues-style of Brother Yusef!

Get Tickets to See Brother Yusef!