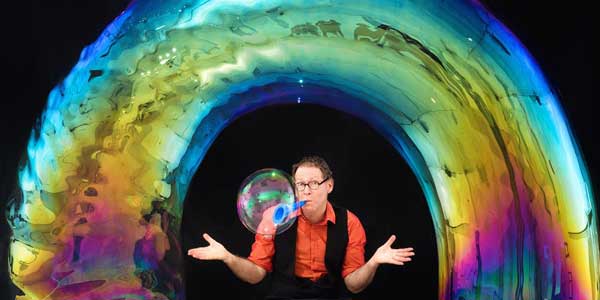 You have to admit it. There’s just something inherently fascinating about bubbles! Blowing into a soapy circle and watching an iridescent sphere emerge to float delicately through the air feels like magic. Creating round rainbows out of nowhere can lead to an afternoon filled with sudsy fun for kids of all ages.

Of course, there’s more to bubbles than just a pretty face. And the science behind what makes bubbles, well, bubbles, is just as fascinating as the bubbles themselves. It was the art and beauty of bubbles that first attracted Louis Pearl, one of the world’s leading bubble-ologists, to creating bubbles; but it was the science that fanned the flames of fascination and lead Louis to form a company, and later stage performances, all centered around bubbles.

Louis Pearl, the Amazing Bubbleman himself, became enamored with bubbles during his college days as he studied painting at UC San Diego. For a class project he fashioned a trumpet out of cardboard that allowed him to blow behemoth bubbles – art that was brief, but sublimely beautiful.

Years later a friend of Louis’s gave him a plastic version of his art school cardboard bubble trumpet made by a failing toy company, a whole box of them. It was these plastic bubble-blowing trumpets that would change the course of his life.

When he was short on cash one day in San Francisco, Louis made the decision to sell his supply of bubble trumpets. Naturally, the best way to get customers interested in what he was selling was to demonstrate how well they worked – which he did, on a street corner. Once he saw how much demand his demonstrations created, he realized he just might have a future in the bubble toy business.

He then started Tangent Toys, a company that manufactured and distributed 147 products relating to bubbles and other visually appealing science-based toys. He sold the company in 2002 after deciding that he’d rather play with the toys than simply sell them.

Louis has been performing for audiences around the world for over 30 years. In fact, he’s had quite a bit of success over in the United Kingdom.  He performs at the Edinburgh Fringe Festival every year, which has led to him touring extensively in England, and even Europe and Asia.  His shows are unique demonstrations of bubble artistry sure to amaze and inspire the kid in all of us.

But you won’t find run-of-the-mill bubble blowing at a Louis Pearl show. You and your family will witness unbelievable spellbinding bubble tricks like square bubbles, bubbles within bubbles (within bubbles), fog-filled bubbles, giant bubbles, bubble sculptures, and even people inside bubbles.

In addition to the fun family shows, Louis also performs for schools and students of all ages. Thanks to the multifaceted nature of bubbles he can sneak some science in along with the fun. For his educational performances Louis covers topics like:

If you’ve ever felt the powerful lure of a soap-filled bubble wand or danced with delight as delicate orbs drifted all around you, you owe it to yourself to check out The Amazing Bubbleman. He’s sure to elicit gleeful gasps and shrieks of laughter from audiences of all ages.

Tickets to see The Amazing Bubbleman on Sunday, November 4, 2018, at 2:00 pm or 5:00 pm are now available and range from $15-$25.  Art to Grow On, a wonderful children’s art center, will provide a fun art activity for the kids before and after the performance.

Get Tickets for The Amazing Bubbleman!