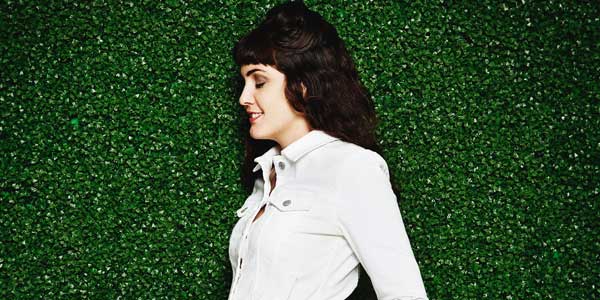 Sarah Jane Scouten is not your typical country singer.

She’s a quiet, willowy beauty with blunt-cut bangs, a big voice, and a deep love for traditional country-folk music. She came from a small island off the coast of Vancouver, Canada, not the American South, and she writes songs covering modern, edgy themes.

She might not fit the trope of the typical country singer with big hair, cowboy boots, and a bolo tie, but once you hear Sarah Jane Scouten sing, you’ll know without a doubt that she is 100% country.

Sarah Jane Scouten grew up on Bowen Island, BC, with her parents and siblings. It was such a rural setting that they didn’t even have a TV set. Instead, they spent their time listening to music – and learning to play from their father.

“There’s a tape of me sitting at the dining table, when I was four years old, and my dad was teaching me how to sing ‘Lace & Flowers’ by Willie P. Bennett. He was walking me through it, like I was his musical experiment,” she told Brad Kolodner of Bluegrass Country Radio.

Some of her earliest memories are of sitting next to her father on the couch, listening to him play the banjo. There were musical instruments all around their living room, and thanks to her father’s love of music, and encouragement to learn to play, Sarah Jane and all of her siblings are musical to some degree.

Sunday mornings in particular were special. Her parents would put on a Hank Williams album and make pancakes for the whole family. They would sing together before and after breakfast, sticking to the classics – and gospel and bluegrass, too.

Now, years after being discovered by Light Organ Records (a Vancouver label) Sarah Jane Scouten writes songs and tours all over the world with her band. Her original songs show her love for the traditional country-folk music she grew up on, while also playing with style to create her own distinct artistic voice.

In 2017 she released her third full-length album, When the Bloom Falls From the Rose, which she recorded in Toronto with veteran Canadian producer Andre Wahl. The ten original songs on the album range in style from indie folk-rock to classic honky tonk, and there are also two traditional Western Canadian songs that Sarah Jane has breathed new life into with her signature unique arrangements.

Sarah Jane Scouten’s performance is part of the Studio Cabaret Series at TOCA. The Studio Cabaret Series is a way to enjoy musical talent and tasty food in an intimate setting; it’s like dinner theater for your ears! The performances are set in the George Nakano Theatre at four-seat cocktail tables. Meals for the Series this season are prepared by the talented chefs at the Red Car Brewery.

Dinner for the performances of Sarah Jane Scouten will be Autumn salad, BBQ pulled chicken minis, and corn off the cob. And goodies from the always delicious Torrance Bakery will be available at intermission.

Boot scoot on down to the Torrance Cultural Arts Center to enjoy a performance by an award-winning Canadian artist. Tickets are still available to see Sarah Jane Scouten October 26 & 27, but they won’t last long (the Studio Cabaret Series is our best seller). Get your tickets today!