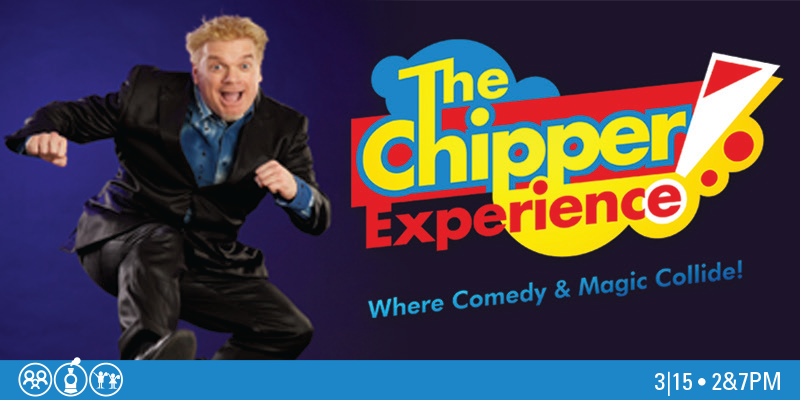 Magician and comedian Chipper Lowell did not have your average, run-of-the-mill childhood.

His father was a circus clown (from the golden age of Ringling Brothers clowns). His mother a dancer and aerialist. From two weeks old, Chipper traveled with his parents during the “on” season as they worked for the circus (Ringling Bros, to be exact). During the two-three month “off” season, they spent time at home, practicing routines and trying to fit into the neighborhood.

“We were home about 2-3 months out of the year, the rest of the time we were traveling [around the world]. We had an A-frame rigging in our backyard for my mom to rehearse her aerial acts…about 5 weeks before we’d head out on the road again, my mom started going out and using the aerial rigging, hanging, literally, by her teeth to strengthen the neck and shoulder muscles that’s holding the rest of her weight, and our [new] neighbors called the police because there was a woman who looked like she was hanging herself! We were a little bit if the Adaams family of the neighborhood,” Chipper said during his TOCA Backstage interview.

But it was this unusual upbringing – spending time with talented performers, seeing the nuts-and-bolts of traveling shows, and even being part of the show – that paved the way for his own life-long career in show business.

Now, Chipper is bringing his critically-acclaimed, much-beloved show, The Chipper Experience: Where Comedy & Magic Collide, to the Armstrong Theatre for two performances in March.

Trust us. This is one you’ll want to see!

Chipper’s first foray into show business came, unsurprisingly, as a child. He’d help run the concession stand during shows, and later he was part of his mother’s aerial act; handing her props and providing the “ta-dah” hand flare.

He found that he loved comedy, but didn’t love the clowns at the circus. He much preferred the comedic routines he watched Charlie Chaplin or Buster Keaton perform in the movies.

He also had a keen interest in magic that started in childhood when he would get into his father’s trunks and play with the magic props he found there.

As a teenager, he took his love for comedy and magic to the clubs. Chipper started performing in comedy clubs doing stand up. He honed his comedic chops by studying improv with the Groundlings in LA.

“I transferred into doing comedy clubs, doing stand up, but making fun of all the variety arts I had grown up with. So I was making fun of juggling, and balancing and magic, and as it went on, I kept gravitating more towards magic…I loved the aspect of magic, but I went comedy first, is what happened, then little by little I kept adding in more magic that would puzzle the people, and make them go ‘wait a minute, that was funny but how the heck did you do what you just did?’ I like that aspect! People don’t know if a joke’s coming next, or when they think a joke is being set up suddenly I get them on the magic angle and suddenly they see something visually they can’t explain. My magic is highly interactive and there’s mentalism involved…I grew up with one foot in the comedy club world another one in magic another one in variety…I like a little bit of everything, kind of peppering it all in,” Chipper said.

He tested his material in comedy clubs, starting out by making fun of the types of variety shows he grew up with: juggling, balancing. Before he knew it, he had a full-fledged comedy and magic routine. He made the move from comedy clubs to casinos, delighting audiences six days a week with his fast-paced jokes and unexpected magic.

“From there I quickly jumped from Comedy clubs to doing casinos, and for many years I was doing multiple shows in Atlantic City, Lake Tahoe, Laughlin, Vegas, and as those shows sort of started drying up, I jumped back into comedy clubs. One of the things I kept doing was more time, more and more time. Comedy clubs I could do maybe 45 minutes. Gradually, I was able to turn it into a more theatrical show. Now I do either 90 minutes without an intermission or 2 hours with an intermission where it looks like I’m just kind of goofing off on stage, but it’s tons of fun routines,” Chipper said.

“Take pride in doing a lot of original material and coming up with original routines. A lot of which you may have seen on Masters of Illusions, which I’ve been doing for the last six seasons…each season I would appear on the show anywhere from three to six or seven times. Doing new stuff because I wanted to create new stuff each and every year. Little by little those things rotate, like volleyball rotation, so that if you’re gonna come see, but you’ve seen me on TV, your not going to see the same things live so that it’s fresh for everybody. To this day, I love the process of creating 3-4 new routines that will start going into the show this coming season,” said Chipper.

These days you can see Chipper on TV as a recurring guest on the CW show Masters of Illusion, or performing on tour at comedy clubs, theaters, casinos, or even cruise ships across the US.

The Chipper Experience: You’ve Never Seen a Show Like THIS!

The Chipper Experience: Where Comedy & Magic Collide is a show like nothing you’ve ever seen before. Part comedy, part magic, part improv, and full of audience participation, it’s never the same show twice.

“It’s taking comedy and magic and trying to see what comes out of it. It’s a fun mix of improv, audience participation, you never know where the show is really going, so there’s a lot of in-the-moment stuff that’s really happening in front of everybody’s eyes, live,” he said.

Chipper’s early life prepared him well to become a star in his own right. His sharp wit, impeccable comedic timing, and masterful ability to continually create his own original routines and tricks, not to mention keep an audience engaged and laughing for an entire 90 minute show, are what make The Chipper Experience a show you won’t want to miss.

Click here to get tickets to The Chipper Experience!