The Hot Licks & “The King of Folk-Swing,” Dan Hicks 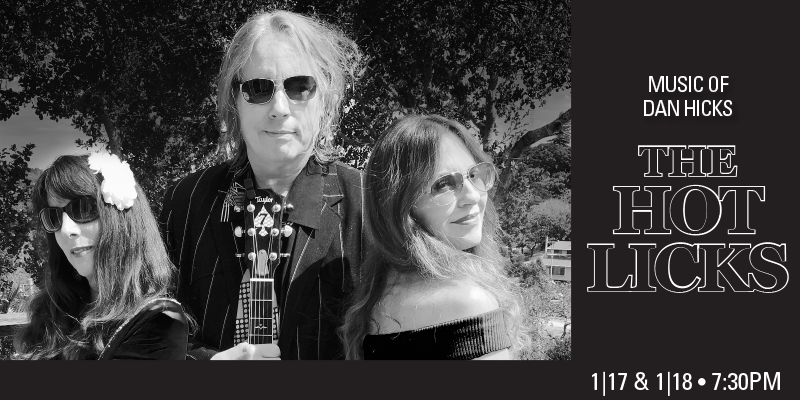 In 1965, San Francisco was at the center of new social movements. Movements for civil rights, women’s rights, workers’ rights; movements against war and for peace; and especially a movement heralding a dramatic shift in the way we created music.

During this time, musicians from all over came together, forming bands who loved to experiment and bend the rules of how music worked. They blended different types of music together – folk, rock, jazz, swing – creating new genres and, eventually, a whole new sound that became known as the San Francisco Sound.

One of the musicians at the forefront of this musical shift was Dan Hicks. Dan was a drummer, guitarist, singer, and songwriter who loved acoustic music and wrote dry wit into his song lyrics. He started out in The Charlatans, the first psychedelic rock group, and later formed the band he gave his name to: Dan Hicks and his Hot Licks.

Check out the TOCA Backstage interview with Daria and Paul Robinson from The Hot Licks!

The Rise of Dan Hicks

Dan was born in Little Rock, Arkansas, in 1941, but moved to Santa Rosa with his family when he was five. It was during grade school that he learned to play the drums, and by the age of 14, Dan was playing gigs with local dance bands. At 18 he took up the guitar, started singing, and officially joined the burgeoning San Francisco music scene by playing at local coffee houses.

Then in 1965, Dan joined The Charlatans, one of the main bands playing around San Francisco. During his time with The Charlatans, Dan wrote and performed some original material, but he didn’t love the rock ‘n’ roll feel of the group – nor did he see a real future with them.

In 1968, he decided to branch out on his own, forming Dan Hicks and His Hot Licks. He had a vision for what he wanted the Hot Licks to be – a folk-swing band blending folk music, gypsy jazz, and swing with lots of vocal harmonies. They became popular thanks to their relaxed, all acoustic playing style, which was in sharp contrast to the more aggressive rock music of the time. The Hot Licks featured two guitars, a violin, stand up bass, and two female backup vocalists – an arrangement they’ve (mostly) kept to this day.

The Hot Licks signed a recording deal with Epic Records for their first album, “Original Recordings”, but it didn’t sell well. Subsequent albums (on the Blue Thumb label), along with live performances, established them as a successful touring band.

Then, just as their popularity was on the rise in 1973, Dan was done. He felt worn down and disillusioned. He took some time off until the 80s when he returned to the music scene with a new group, the Acoustic Warriors. In the 1990s, Dan started The Hot Licks again, and for many years after that, they toured regularly until Dan’s health declined with the onset of cancer. He hung on for a couple of years, performing locally when he felt strong enough, but succumbed to his illness in 2016.

Today the Hot Licks are keeping the unique music and legacy of Dan Hicks alive and well. They perform his original songs, along with songs he loved to cover in his own style, for new audiences up and down the West Coast. The current touring members of the Hot Licks are “Lickettes” Daria (vocals/percussion/melodica) and Paula Bradman (vocals/percussion); and “Lickmen” Paul Robinson (guitar/vocals) and David Boyden (violin). They’re dedicated to preserving the sound and spirit of Dan Hicks, holding high the banner of folk swing (and a truly original musician).

The Hot Licks, Part of the Studio Cabaret Series

The Hot Licks are next up in our Studio Cabaret Series. The Studio Cabaret Series is a way to enjoy musical talent and tasty food in an intimate setting; it’s like dinner theater for your ears! The performances are set in the George Nakano Theatre at four-seat cocktail tables. Meals for the series this season are prepared by the talented chefs at the Red Car Brewery.

Dinner for the performances of The Hot Licks will be baby mixed green salad, chicken pot pie, and seasonal vegetables. Plus, goodies from the always delicious Torrance Bakery will be available at intermission.

Get Tickets for The Hot Licks!