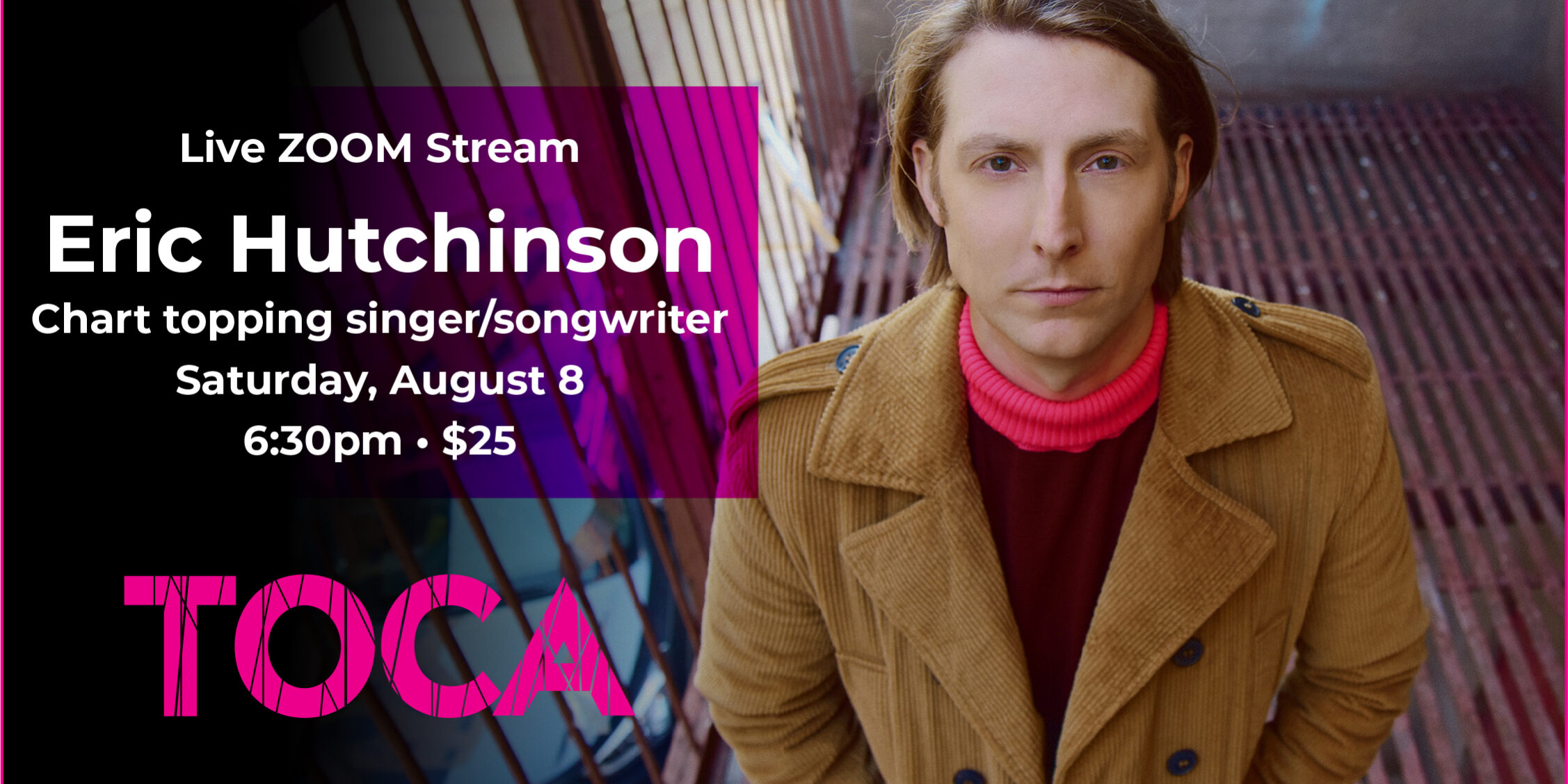 Until we can get back to bringing you live performances in the theatre that you can share with others, we will continue to bring you live entertainment events directly to your home. While your sofa may be a little more comfortable than a theatre seat, we do suggest that you still change out of your pajamas since most of these events are on Zoom… which means that you might be seen by others.

Why not make it a truly special evening with getting some take out (pick up or delivered) from a local restaurant. They can use your support too.

On Saturday August 8 at 6:30pm we will be presenting Eric Hutchinson performing live!

Sometime last year, Eric Hutchinson came to a strange realization: he kept daydreaming about high-school. It had been over twenty years since the singer-songwriter had graduated from Montgomery Blair High School, yet his adolescent dreams, hopes, fears, anxieties and emotions the singer faced as a kid began flooding back; suddenly, the singer felt transported back into his teenage self. Growing up in suburban Maryland, Hutchinson’s teenage years were filled with the type of alienation and private angst recognizable to most anyone who’s ever been 16. Twenty-plus years later, the singer was finally ready to write about it.
The result: Class of 98, a 90’s alt-rock-inspired autobiographical record that chronicles the singer-songwriter’s adolescence.

“It took me a long time to understand myself,” Hutchinson says. “Writing this record allowed me to get into the time machine and go back and look around my old life and report from my current point of view. That was fun. The problems were waiting for me: Who likes me? Why doesn’t this person want to be around me? Why don’t I understand myself?”

After experimenting with a series of genres like Americana/soul and jazz on his last few albums Modern Happiness and Before and After Life, the singer-songwriter turned to the pop-punk alt-rock of his youth for the riff-heavy Class of 98, taking inspiration from bands like Green Day, Oasis, and Weezer. “That music is in my guitar DNA,” says the singer. “I love 90’s music, and this type of sound was so formative for me.” To help round out his sound, Hutchinson recruited Justin Sharbono (formerly of Soul Asylum) to offer his distinctive (and period appropriate) guitar playing on the album. Hutchinson also enlisted the sonic guidance and mixing talents of Paul Kolderie, who’d made great 90’s records with bands like Radiohead, Hole, The Lemonheads, Buffalo Tom and The Pixies.

For Hutchinson, taking such an imaginative leap with a concept as specifically personal of Class of 98 was an artistic risk he knew he needed to take. “I don’t think people want me to keep making the same record, as much as anyone might think they do,” he says.

The opening track “Rock Out Tonight” sets the scene with a narrative that evokes the high-drama restlessness of a group of teenagers aimlessly driving around the suburbs in a Ford Taurus. The song, says the singer, is about “wanting to be rebellious, but having no idea how to do so.”

Meanwhile, cinematic songs like “Drunk at Lunch” and “Cooler Than You” show a darker underbelly of Hutchinson’s high-school introversion, echoing a theme that the singer-songwriter has been tackling in his work ever since releasing his chart-topping debut LP Sounds Like This, in 2007. “I’m always interested in asking questions in my songs: who’s cool, who gets to decide, and where do I fit into all of that?” he says.

But the emotional centerpiece of Hutchinson’s latest, and the song that was the most difficult to write, is “My Old Man,” written in the wake of his father’s passing, after years of living with Myotonic dystrophy. More than anything else on the album, the deeply personal song gets at the album’s central tension of writing from the teenage perspective while simultaneously embodying the adult point of view.

“I didn’t necessarily get along with my dad in high school,” says the singer. “We were in different places in our lives and he had different things to worry about. I tried to sing this song from my perspective back then as well as my perspective now, where I’ve made peace with him.”

Taken as a whole, Class of 98 arrives as Hutchinson’s most playful yet distinctive work, one that will surely resonate with longtime fans of the singer’s pop-rock hits like “Rock & Roll,” “Tell the World,” and “Watching You Watch Him.”

For Hutchinson, the experience of delving back into his high-school youth helped him learn a lot: about his upbringing, about parenthood, and about himself.
“I like the 90’s way better,” he says, “when I’m not living in them.”