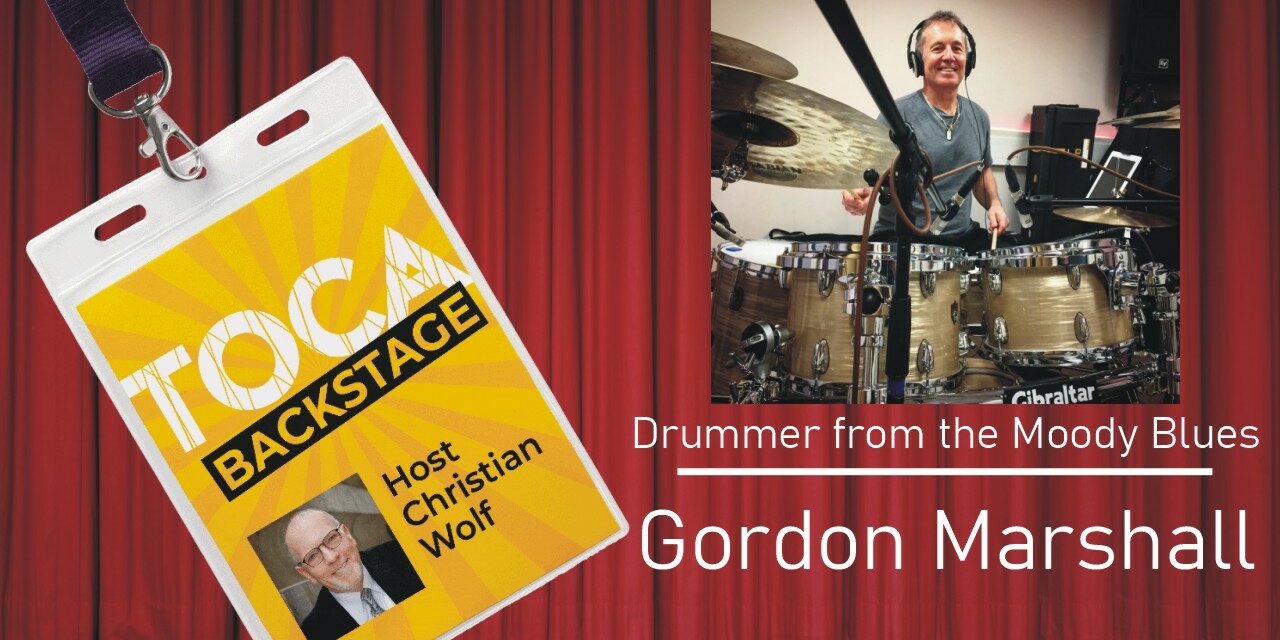 Prior to the arrival of the Covid-19 pandemic, TOCA was looking forward to presenting Go Now: The Music of the Moody Blues. Lead by Gordon Marshall, the drummer of the group for over 25 years, this was sure to be one of the highlights of the season. Needless to say, as the current health crisis began to limit travel, the group had to cancel their US tour, leaving us to have to cancel our April performance. However, prior to all this, I had the good fortune of speaking with Gordon for our TOCA Backstage podcast.

It turns out the group was just as disappointed as the fans to have to back out of the tour, so they have created an hour long concert on video that they would like to share.

Watch our Interview below!

THE MOODY BLUES. They sold in excess of 70 million albums worldwide, were awarded 14 platinum and gold discs, and were inducted into the Rock & Roll Hall of Fame in 2018. But the band has not performed together in concert for the past few years and have no plans to return to touring.

Gordon Marshall, the drummer with The Moody Blues for over 25 years, knew that there was a hunger in the market for Moody Blues music. Five years ago, to fill the void, he put together an amazing group of musicians and formed the band GO NOW!, a tribute to the music of The Moody Blues. Mick Wilson, the lead singer of GO NOW!, was the lead singer with 10cc for over 20 years. Mick was also the “singing voice” in the Academy Award-winning movie Bohemian Rhapsody for the actor who portrayed Queen’s drummer. Gordon and Mick are joined on stage by Patrick Duffin, Ryan Farmery and Nick Kendall, and together recreate the magical music we all know, including all the major hits. With 25 years’ experience with The Moody Blues, Gordon has created true-to-the-original arrangements, making every performance truly magical.

In an endless sea of rock and pop formats, The Moody Blues distinguished themselves through four decades as that shimmering jewel vindicating rock music as a substantial artistic contribution to Western culture. Since the 60’s, as a part of the historic original British invasion of Supergroups, The Moody Blues lit up the hearts and minds of millions of rock fans with inspiring anthems like “Nights in White Satin,” “Tuesday Afternoon” and “I’m Just A Singer (In A Rock And Roll Band),” which express universal themes of love, compassion and peace.

The band’s unique style of music consistently finds airplay on radio stations globally and continues to illuminate concert arenas around the world. From being immortalized on The Simpsons to having their music featured in movies, television and in national advertisement campaigns such as VISA, The Moody Blues are embedded in not only music history but in pop culture. They have sold in excess of 70 million albums worldwide and have been awarded an astonishing 14 platinum and gold discs; they were inducted into the Rock & Roll hall of Fame in 2018. But the band has not performed together in concert for the past few years and have no plans to return to touring as The Moody Blues.

For the past four years GO NOW! have performed throughout the UK, selling out theatres and making many return appearances. Their first venture into the U.S. in 2019 resulted in 12 out of 12 sold-out performances at venues in Arizona and resulted in a repeat 14-show run in Arizona and California in the spring of 2020. Their April 2021 engagements with the Virginia Symphony, the Omaha Symphony and the Philly Pops have made it possible for more U.S. venues to bring the hauntingly beautiful music of The Moody Blues to Baby Boomer fans who still swoon when they hear those first magical notes of “Nights in White Satin”.