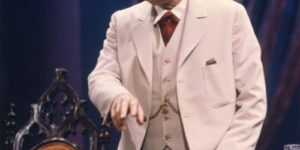 When Hal Holbrook first picked up the mantle of American literary legend Mark Twain, he could not have known it was one he would wear for more than 62 years. And it is this performance as Mark Twain that has become one of the most acclaimed and enduring in the history of theater.

Born in Ohio in 1925, it was during his senior year at Denison University that Holbrook first thought to take on the persona of Mark Twain. That honors project lead him to develop the one-man show he is now best known for.

At the age of 29 Holbrook started on tour with his show, and now, over 2000 performances later, Holbrook has been Mark Twain for a longer period of time than Samuel L. Clemens was.

Aside from his portrayal of beloved icon Mark Twain, Holbrook has been in movies, TV shows, and many different stage productions over the span of his career. He was the nominated for an Oscar for his performance in the movie Into the Wild in 2008, and, at the age of 82, was the oldest nominee ever. In 1966 he won a Tony for his one-man show Hal Holbrook: Mark Twain Tonight! and was also nominated for a Primetime Emmy for the televised version in 1967 (though he didn’t win).

Holbrook’s long and storied career includes more awards and nominations than can be documented here, and he has always prided himself on maintaining the age-old tradition of acting. In fact, that’s why he keeps touring as Mark Twain.

“Whenever you find yourself on the side of the majority, it is time to pause and reflect.”
~Mark Twain

One might wonder, “Is Mark Twain still relevant in 2016?” The short answer is “yes.” Much of what Twain wrote about had to do with human nature. His commentary and coverage on everything from slavery and civil rights, to labor and religion delve down into the the very root of why humans do what they do. It’s that humorous insight that keep his literature fresh and relevant, even in today’s modern world.

This is exactly the perspective that Holbrook believes, too. According to an interview Hal did with The Hollywood Reporter earlier this year, it’s the world that keeps Mark Twain fresh.

“The human race keeps acting like a bunch of…fools, all you got to do is look at what’s going on. Mark Twain wrote about all of this – you and me and our behavior and our misguided ideas about who we are, the lies we tell each other, the lies we tell ourselves, it’s a part of our history.”

Or, to put it more succinctly, as Holbrook said in an interview with Michael Eisner, “The purpose of doing Mark Twain is to make people think.”

Come spend an evening with an American icon played by one of the most renowned American actors of our time.

Join us and spend an evening with Mark Twain here.