Going “Back to School” With Sister 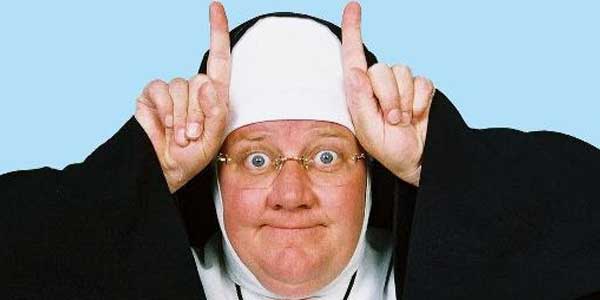 Click here to get tickets to see Sister’s Back to School Catechism: The Holy Ghost and Other Terrifying Tales!

An imposing figure stands on stage, robed in a traditional nun’s habit, and radiating authority. You can almost feel the sharp crack of the ruler against your knuckles as she speaks in a booming voice that fills the room.

But what she says is not what you’d expect from most Catholic nuns. This Sister is here to entertain you more than educate you!

Sister’s Back to School Catechism: The Holy Ghost and Other Terrifying Tales is part stand up comedy, part scripted play, with a lot of audience participation thrown in.

Originally conceived and written by Vicki Quade and Maripat Donovan, the Late Night Catechism series debuted in Chicago back in 1993. Since then the series has grossed over $100 million in box office receipts, has been presented in over 410 cities all over the world, and has expanded to include several other installments of Sister’s brand of Catholic teachings.  And more than 100 actresses and comedians have played the part of Sister in the eight different shows.

TOCA Backstage: Chris Wolf interviews Denise Fennel, who will be playing Sister in this performance.

All the Late Night Catechism shows are uproariously hilarious, dragging audience members on a hysterical – or painful – walk down memory lane. Throughout the performance, Sister switches between benevolent instructor who rewards her “students” for answering correctly, to authoritative drill sergeant.

During the performance of Sister’s Back to School Catechism: The Holy Ghost and Other Terrifying Tales, the audience will get hands-on experience in building a Catholic-appropriate Halloween costume, and lessons in Halloween tales of ghosts and goblins.

You won’t want to miss this unique spin on Catholic “education”! Dust off your rosaries and get ready for the divine comedy of Sister as she teaches you all about celebrating Halloween – the “right” way!

Sister’s Back to School Catechism: The Holy Ghost and Other Terrifying Tales will be at the Armstrong Theatre for two shows on October 20, 2018 (2:00 and 8:00). Tickets will sell fast, so don’t delay, get yours now!

Click here to get tickets to see Sister’s Back to School Catechism: The Holy Ghost and Other Terrifying Tales!