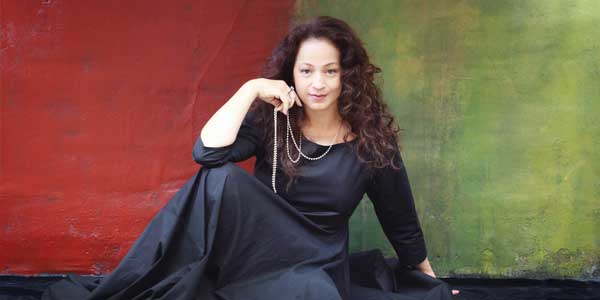 “You don’t choose this life, it chooses you.”  ~Leonard Cohen to Perla Batalla

Grammy-winning artist Perla Batalla was born into a musical family. Her father was a musician and singer and her mother ran the family record store. Music was woven in the very fiber of her being, linked, inextricably, to her future. Her path was set long before she took her first breath.

“[Music is] a family tradition. I come from a long line of loud people,” Perla told NPR podcast host Tom Wilmer. “Music has been the soundtrack to my every moment.”

Starting as a young child, Perla was exposed to every type of music from all around the world. The soundtrack of her day could range from mariachi music to German folk music to Argentine tangos.

One thing was for sure: music was like magic to young Perla. It had the power to turn big, burly, (often intimidating) family members from scary, grumpy guys, into weeping angels when someone strummed a guitar. She knew from early on in her life that she wanted to be a professional musician.

As she built her career, she sang in all kinds of groups: jazz, swing, rock, even a hard core punk band. It was through a friend of hers, fellow singer Julie Christenson, that she met Leonard Cohen and the trajectory of her career was changed forever.

Perla had known her friend Julie for many years after singing together in bands and appearing in MTV videos, when she received a call from Julie, telling her she was looking for a backup singer – for Leonard Cohen.

“She called out of the blue and said ‘You know I’m working with Leonard Cohen and we’ve auditioned everyone in town and we haven’t found the right singer, are you interested in coming in?’ And I said of course I am! That night I got several cassette tapes and listened to them and was so impressed with the quality of the lyrics. I came in the next day, and I laugh about it because I really thought long and hard about what I should wear, and I arrived at the audition and Leonard was dressed in black from head to toe and I was dressed in white from head to toe. We laughed and we said we were a match made in Heaven,” Perla said.

From there Perla was hired as one of Cohen’s backup singers – a job she held for 10 years – a job that changed her life. She toured the world with his show and he became a mentor to her. In fact, it was Cohen who encouraged her to start writing her own songs and recording her own music.

“Leonard Cohen has influenced every aspect of my artistic life in every possible way. A day does not go by that I don’t think ‘What would Leo think?’,” Perla said about her mentor.

With Cohen’s blessing, Perla created her first of seven solo albums – including a tribute album to the songs of Leonard Cohen. Her tribute album, “Bird on a Wire”, was produced with Cohen providing some oversight and direction. He would attend recording sessions and give opinions about musical arrangements, and even participated in a photo shoot.

Perla started thinking about a follow up to her tribute album in 2015, and when Cohen passed away in 2016 she knew she wanted to include some of his lesser-known songs that she had fallen in love with years before.

Leonard Cohen has a large body of work, a lot of which is well-known and beloved by people all around the world. But because she toured with him for a decade, and because they were close, Perla was familiar with a whole catalog of lesser-known songs that she knew, loved, and wanted to share with audiences.

That’s when she put together her show House of Cohen as a way to pay tribute to a man whose work she loved and to highlight his lighter side. The show features songs and personal anecdotes that aim to dismiss Cohen’s nickname of “The Godfather of Gloom.” The man Perla knew had a sly, sometimes absurd, sense of humor, with a love of shopping at the 99 Cent Store and eating hot dogs at Home Depot.

Audiences can expect a show infused with Perla’s cross-cultural musical stylings (including songs she sings in Spanish that do an excellent job of capturing the meaning and power of Cohen’s music) and her powerful, vibrant, effusive voice.

“Singing Leonard Cohen’s lyrics never gets old,” she said. “Each time is like a new discovery.”

Come discover a side of Leonard Cohen that few people knew. Don’t miss Perla Batalla as she performs her show “House of Cohen”.

Get Tickets to see Perla Batalla