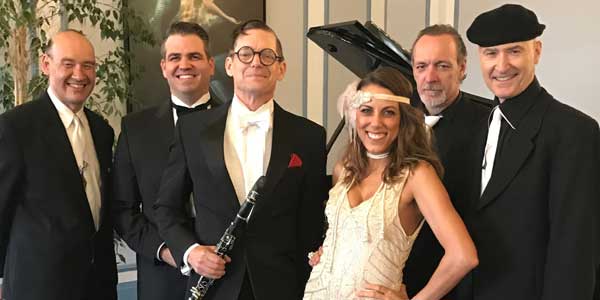 Ever heard the saying “everything old is new again”? It means something, like, say, music, from a bygone era can be discovered, or rediscovered, and feel brand new and exciting, even though it’s been around for ages.

Well, that’s exactly the premise behind modern-vintage jazz sextet Jack’s Cats. Jack’s Cats is made up of some the best musicians and vocalists in the LA vintage jazz scene, and they perform all around Southern California, much to the swing scene’s delight.

The band is the brainchild of band leader and clarinetist, Jack Malmstrom. They’ve been winning over audiences (and Lindy Hoppers) with their warm, melodic sounds from the small jazz combos popular during the 30s and 40s for many years.

“At Jack’s Cats’ performances I stand at the edge of stages gazing out across darkened rooms filled with Lindy-hopping fans while our elegant vocalist, Kitty, croons some catchy tune and the band beats out a swingin’ rhythm. A lost culture has been reanimated and it’s just the most exquisite sensation of time travel imaginable. But we’re not strict historical re-enactors, and It’s our hybrid of past and contemporary culture that’s turned out to be most exciting and interesting,” Jack told The Voice Magazine in a 2014 interview.

It’s true that at any given show you can expect to hear familiar songs from the 30s and 40s, including favorite jazz standards, but you’ll also hear obscure, nearly-forgotten jazz gems, and even some original compositions done in the style of the period.

And this is never a dull show! The musicians on stage clearly love what they’re playing and enjoy every second of it. That joy is tangible, passed from the stage to the audience, until the whole room is lit up by smiles and tapping feet.

Falling in Love With Jazz

Unlike a lot of musicians, Jack didn’t start his musical career during childhood. He fell in love with the musical time period as a young boy, going so far as to create his own “nightclub” inside an old refrigerator box with a transistor radio. He was even so entranced by a jazz musician at Disneyland that he missed his chance to meet Mickey Mouse!

But it wasn’t until he was in his mid-30s that Jack decided one day he was going to do what he’d always dreamed about: becoming a jazz musician. Wasting no time, he sought out teachers and dedicated himself to learning his craft.

“There wasn’t a chance for me to learn music during my childhood, but I was always obsessed with mid-twentieth-century popular culture and slowly began to see jazz, and the clarinet in particular, as perhaps the purest expression of the period. This interest grew into a passion in early adulthood, and by my mid-thirties I’d finally carved out the opportunity to begin musical instruction. I hope that’s encouraging to any adults who think they’re too old to pick up an instrument,” Jack told The Voice Magazine in the 2014 interview.

Now, after a somewhat circuitous route, Jack is finally exactly where he wants to be: on stage with other talented musicians, playing the music he loves. His previous path, as a fine art major in college, a painter, and a creative director for an advertising agency, put him in a unique position – to be able to lead a team of creative people towards the goal of becoming a successful jazz band.

And he’s done just that. Recently The Cats announced a new weekly residency at the Cicada Restaurant in downtown LA, where they’ll be performing three nights a week as part of Maxwell DeMille’s popular Cicada Club. They’ve also released an album titled Low Down Dirty Swing, plus an additional demo album.

Jack’s Cats performance is part of the Studio Cabaret Series at TOCA. The Studio Cabaret Series is a way to enjoy musical talent and tasty food in an intimate setting; it’s like dinner theater for your ears! The performances are set in the George Nakano Theatre at four-seat cocktail tables. Meals for the Series this season are prepared by the talented chefs at the Red Car Brewery.

Dinner for the performances of Jack’s Cats will be shepard’s pie and baby mixed greens salad. Plus goodies from the always-delicious Torrance Bakery will be available at intermission.

Jack’s Cats’ swingy rhythms and authentic feel are perfect for audiences of all ages and from all walks of life. Don’t be surprised if the upbeat, melodic music makes you feel like getting up and doing the Charleston – and don’t fight the urge, either. Jack and his Cats encourage dancing!

Tickets are still available to see Jack’s Cats on January 18 & 19, but they won’t last long (the Studio Cabaret Series is our best seller). Get your tickets today!

Get Tickets to See Jack’s Cats!