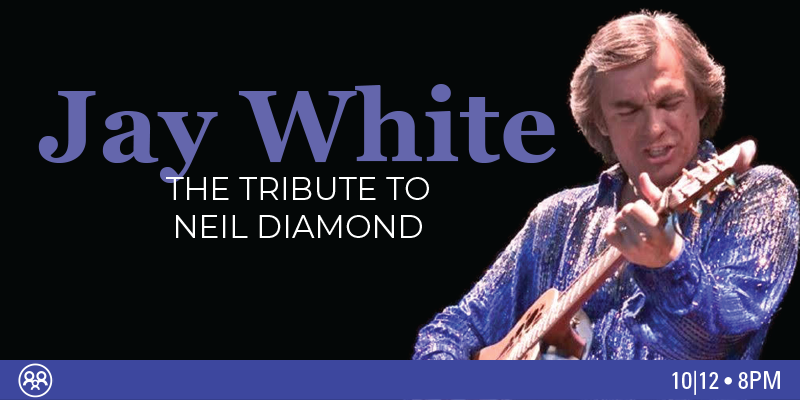 Click here to get tickets for Jay While and the Ultimate Neil Diamond experience, October 12, 2019, at 8:00 pm!

If it wasn’t for Neil Diamond, it’s safe to say Jay White’s life would be much, much different. In 1983 Jay left a comfortable job as a life insurance salesman to try his hand at making a living being someone else.

“I told my wife, I think I’m just going to perform full time for a while and see how it pans out. It’s turned out to be quite a ride,” Jay told the Aspen Times.

For more than three decades White has been the pre-eminent Neil Diamond impersonator in the country. After he took the leap to leave his day job, he landed first in Tahoe at Nuggets and Caesars, then moved on to Las Vegas.

For most of the 90s White was part of the Legends in Concert show at the Imperial Palace. Then, after nine years, he went on to star in a solo show at the Riviera where fans could experience the ultimate Neil Diamond concert.

Not only has White perfected the Neil Diamond sound during performances, his physical resemblance to the singer is uncanny. They look so much alike, in fact, that White scored his first major motion picture debut in 2008’s Frost/Nixon playing none other than singer himself during a party scene.

The similarities don’t end there, either! White often performs with members of Diamond’s long-time touring band: percussionist King Erisson and keyboardist Mark Levang. White first met Erisson over 15 years ago when Erisson watched him perform during Legends in Concert. White so impressed Erisson that he offered to join White on tour.

White didn’t hesitate to take him up on his offer and now, more than 15 years later, they still tour together whenever Erisson is available.

And finally, White’s costumes are more than simple look alikes. He performs in some of Neil Diamond’s actual concert costumes, once worn by the man himself.

What does Neil Diamond think about all this?

Diamond has seen White perform twice both times praising him for his performance chops, and even autographing a picture with the inscription, “Jay, Keep singing so I can stay home and relax!”

Taking Up the Diamond Mantle

Now that Diamond has retired from performances due to his diagnosis with Parkinson’s, White has taken up the mantle left behind by the superstar.

“This man has given me a career for the last 30 years. I don’t know what I would have been doing had I not been doing this. When I heard about his retirement, I thought it’s time for me to pick up the mantle. There’s millions of Neil Diamond fans out there around the world who love his music, and it doesn’t get played on the radio a whole lot any more. The best place to hear his songs are in concert, so I feel like I want to carry that mantle or that torch for him,” White told Ken Broo from 700 WLW in Ohio.

During every performance, at every concert, and every venue, White does his best to give the audience an authentic Neil Diamond concert experience. From the look, to the sound, to the dance moves, to the audience participation, this is the closest you’ll get to seeing Neil Diamond in concert.

Tickets to see Jay White perform his tribute to Neil Diamond on Saturday, October 12, 2019, at 8:00 pm, are on sale now! If you love Neil Diamond’s music, don’t miss your chance to sing along to all the fan favorites performed live by the world’s best Neil Diamond impersonator!

Get Tickets to Jay White!