Have You Heard? KPCC’s Unheard LA is Coming to Torrance 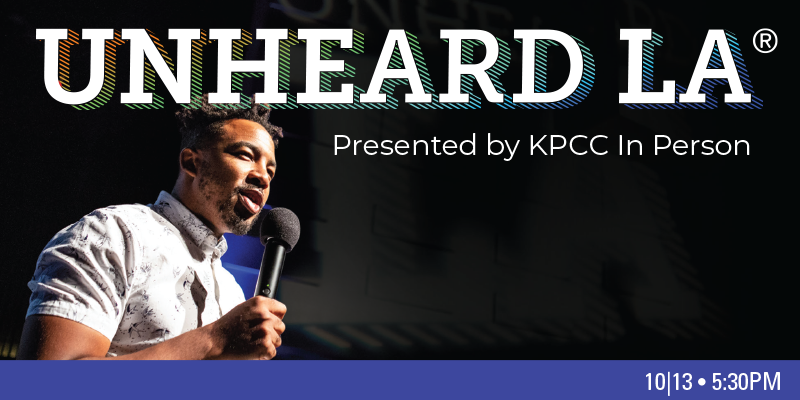 How do you build a sense of community in a major metropolitan area that’s home to millions of people? An area as wide spread, and wildly diverse, as Los Angeles?

According to KPCC’s Unheard LA team members, Jon Cohn and Ashley Alvarado, the way you build that sense of community is through providing a platform that allows people to share stories, and experiences, with strangers.

When you participate in an Unheard LA Live Storytelling event, “One of the hopes is that [it] will be a catalyst for connection…We’re trying to make LA seem a little bit smaller, a little less spread out, and a little more connected than it was when you walked in the door,” said Jon.

Unheard LA is a community-centered storytelling project created by the KPCC In Person team. It was originally intended to explore the nuance and complexity of greater Los Angeles and southern California through the eyes, experience, and perspective of those who call it home.

“There are so many stories that are untold, or unheard by the mainstream,” Ashley said.

“At the end of the day, what we hope is that Unheard will be a catalyst for connection,” said Jon.

Taking place both in LA and the surrounding communities, the free shows generally feature 10-12 storytellers along with host Bruce Lemon. Each story is approximately five minutes long, and all stories are non-fiction. Some participants are experienced storytellers, others are just starting out on their storytelling journey. Unheard LA tries to make the event all about the authenticity of what people choose to share – about the story itself rather than the telling.

While similar to other storytelling shows, Unheard LA prides itself on being just a little different.

“We welcome the broadest definition of storytelling. We’ve had music, spoken word poetry, magic and power points and all kinds of things that bring people in. We’re willing and excited to experiment,” said Ashley.

“[Unheard LA] was ultimately born out of a desire to be reflective of the diverse and multiethnic region in which we live. And to do a better job providing a platform for folks of all communities whatever that means, to share their experience or their story. And that connects back to KPCC LA,” said Jon.

Think Unheard LA sounds interesting? Then you should consider attending the upcoming Salon, which is like a mini storytelling show and informational meeting all rolled into one (with snacks!).

The Unheard LA Salon was designed to help people who like the idea of telling a story, but feel unsure, or reluctant, about participating. The Salon features three past Unheard LA storytellers along with members of the KPCC In Person team. It’s like a stripped-down mini show without a stage, and often without a mic.

After the past participants share abbreviated versions of their stories, a Q & A session follows. This is where people can ask questions about the process and learn what the actual experience is like from people who have told their story on stage. The KPCC team is also on hand to help answer questions

The best part is that their experiment seems to be working.

“What we found, and was a bit of a surprise to us, was the community that sprung up around Unheard LA. We stay in touch with past participants, we get graduation announcements, news about all kinds of life events,” said Ashley.

“You do the show once, then you become part of the alum network. We want to be able to include folks who are from the communities that we’re in. We want to tell some of the local neighborhood experiences,” Jon added.

How to Participate in Unheard LA

If feeling more connected to a greater community sounds like something you’d like to experience, there are a few different ways you can participate.

Get Tickets to Unheard LA

Unheard LA is truly an experience for the heart. You won’t find flashy stage production or elaborate sets. The real stars of this show are the stories and shared experience. You just come in and discover what stories move you.

The Salon will take place on July 18th from 6:30-8:30 pm in the Garden Rooms at the Torrance Cultural Arts Center. RSVP to the event by clicking here.

The Unheard LA Show will take place on Oct 13th at 5:30 at the Armstrong Theatre. Get free tickets to that event by clicking here!