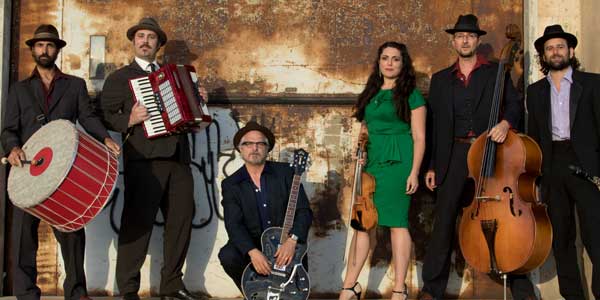 For centuries klezmer music has been a part of Jewish culture, a music of celebration, played at big life events like weddings and bar mitzvahs.

Though klezmer may not be as well-known as other world musics, there are still plenty of modern bands who have taken up the mantle of the traditional tunes. One such band is an ensemble of all-star Bay Area musicians who have come together under the name of Kugelplex.

Kugelplex originally started back in 2001, although none of the founding members still play with the band today. It was in 2003 that Jason Ditzian, current manager and clarinet player for the group, started playing klezmer music with Kugelplex. A musician friend of his had asked him to learn some klezmer songs to play at the bat mitzvah of a 94 year old Holocaust survivor. Being a part of such a meaningful celebratory moment, all because of music, had Jason hooked. And he’s been playing with the group ever since.

“Klezmer is old world soul music. Since the beginning of time, people in villages all over the world, no matter their religion or background, have played music. Village music. That’s exactly what klezmer is,” Jason said. “It touches the communal village music experience, even if that’s not something you’ve experienced personally.”

Jason believes that klezmer is meant to raise the spiritual energy of a time and place. There’s an exuberance that comes with the music that brings people together, lifting them up to celebrate life’s big, once-in-a-lifetime events.

“No matter what your faith is, this is a music of celebration! People want the energy, the excitement, that klezmer brings. There’s just something about the live klezmer experience and being in the room with really good, virtuoso musicians who really feel what they’re playing. There’s nothing like it,” Jason said.

Jason and the other members of Kugelplex – Dan Cantrell on the accordion, Lila Sklar on the violin, Mike Pinkham on drums, and Max Baloian on the guitar – have been playing together for over 10 years. For the performance at the Armstrong, they will be joined by Miles Jay on bass.

“What I really hope people walk away with from our performance, even if you don’t know what kind of music this is, even if you’ve never heard of klezmer before, is that they’re blown away by the amazing musicians who approached the music in an interesting way. The set list will include some of our own compositions, and maybe even an Ethiopian jazz song we all really love and love to play. It really fits pretty seamlessly into our set,” Jason said.

Learn How to Play Klezmer

Think you know what klezmer music is? Well, think again! It’s isn’t just a bunch of songs and ornaments, but a transcendent approach to music – and life in general.

Join Kugelplex’s clarinetist, Jason Ditzian, for a unique workshop all about klezmer. Jason will discuss his ecstatic approach to klezmer, then you’ll play songs together and experiment with different ways to approach music.

This workshop is open to musicians of all levels. But don’t wait to sign up!

Space is limited to the first 20 musicians who sign up. The workshop will take place in the Armstrong Theatre from 4:00-6:00 on January 12th, prior to the band’s performance. If you’d like to sign up, email info@torrancearts.org, call 310-378-8100, or click here to register online.

Come and experience a klezmer dance party full of energy and life! Tickets to Kugelplex’s performance on January 12, 2019, at 8:00, are still available. Don’t miss the chance to share in a musical communal experience!

Get Tickets to See Kugelplex!