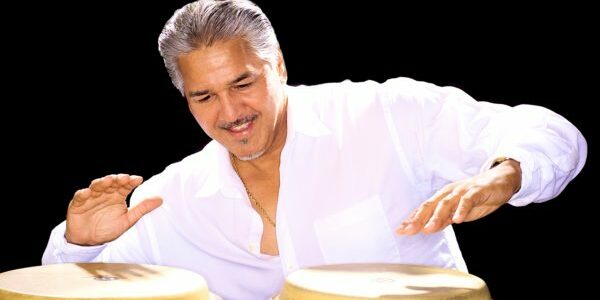 To say that Louie Cruz Beltran is a crowd-pleasing audience-favorite wherever he performs would be an understatement.

From cozy jazz clubs to the Hollywood Bowl, Louie Cruz Beltran gets people out of their seat, tapping their feet, and shaking their booty. TOCA’S own Christian Wolf has said, “I try not to repeat artists very often…but with Louie Cruz Beltran, I had to make an exception. I have not seen an artist who has had the effect that Louie’s had on our audience.”

An Early Love of Music and Rhythm

Born in Bakersfield, CA, and raised with nine siblings, Louie grew up listening to the music of Tito Puente, Lola Beltran, and other well-known Latin musicians. His mother loved a wide range of music and kept a radio playing at all times, infusing Louie’s childhood with jazz, Ranchera music, Gospel songs, and Caribbean folk tunes.

When he was in the third grade, Louie started playing congas after a neighbor saw how enthralled he was watching Desi Arnaz playing them on TV – and gave him a set. But it wasn’t until the early ‘70s that his formal music education began. Louie entered Bakersfield City College and played with the Bakersfield Jazz Ensemble and later the Cal State Jazz Ensemble.

As much as he loved music, Louie had a job as a parole officer in Bakersfield for many years, moonlighting on the side as a musician. And when he got the opportunity to leave his day job behind, he didn’t hesitate but leapt with both feet and never looked back.

As he told the OC Weekly, “…I got an opportunity to go on the road and I decided to let my 8 to 5 job go. It was a big decision for my life. But I just dove into music.”

Pursuing his lifelong passion hasn’t changed Louie from the man who wanted to help troubled youth. He still makes the time and takes opportunities to speak with kids who need some extra help. He hopes to teach a few life lessons and inspire them to pursue the arts. He strongly believes that exposing children to music and the arts at an early age is empowering and helpful.

When he’s on stage you can see and feel just how much Louie loves music. His songs are saturated with passion and pure joy. He’s dedicated to “keeping live music alive and well for all to enjoy.”
Studio Cabaret Series From the Torrance Cultural Arts Foundation