One Small Step Takes a New Look at the Space Race 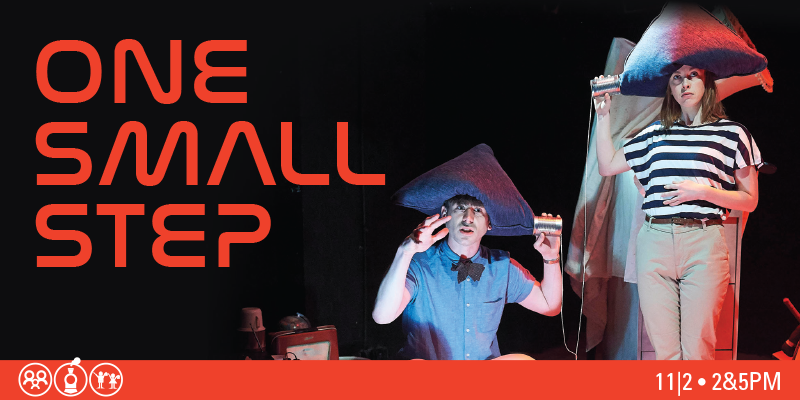 In a time where we all carry powerful technology in our pockets or purses, it’s easy to forget how far tech has come in the past 50 years. We have self-driving vehicles, we’ve sent robots to study Mars, and we have pictures sent from the farthest reaches of our solar system.

It’s hard to believe that there was a time, mere decades ago, when two of the most powerful nations on the planet were competing over technology. Both trying desperately to unlock the science that would take them from Earth into space.

Yet back in the 1950s and 1960s that’s exactly what was happening between the Soviet Union and the United States. The two countries were vying to be the first to send a man to the moon. This is where the story from One Small Step begins.

One Small Step, an imaginative stage play with a two-actor cast, takes the audience through the history of the Space Race. They squeeze several decades of history, and bring 41 different characters to life, into a mere 60 minute run time.

In One Small Step the race to the moon is seen through an enthusiastic, childlike lens. Like children at play, the actors use stage props that could easily be found in attics or basements (or even junk heaps) to make the story come to life. Using triangular pillows on their heads to mimic Soviet scientists, windbreakers to imitate spacesuits, and cardboard tubes to stand in for the spaceships themselves, the props add a touch of whimsy to the story as it unfolds.

According to a review of a Boston performance, the show is a “wonderfully imaginative performance piece that manages to cram more than a decade of scientific achievement into a format as entertaining for folks old enough to have lived through the [era] as it is for kids…who’ve just heard about it in history class.”

One Small Step was written by David Hastings, and directed by Toby Hulse, for the Oxford Playhouse, one of the leading theaters in Britain. The show was first performed in 2008 for the 40th anniversary of the moon landing and has enjoyed a steady touring schedule ever since.

TOCA Backstage Interview with Toby Hulse from One Small Step.

Blast off with the whole family for an afternoon of history and fun! Tickets for the performances of One Small Step on Saturday, November 2, 2019, at 2:00 pm or 5:00 pm are on sale now!

Get Tickets for One Small Step!