Petra and the Wolf, a Modern Telling of a Childhood Classic 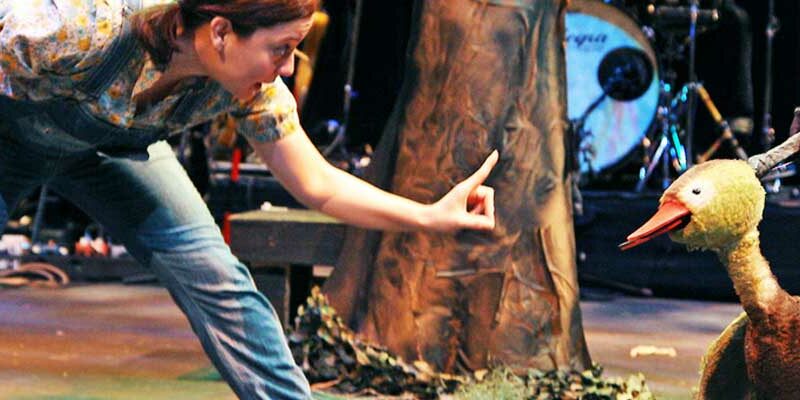 There have been many adaptations throughout the years of Sergei Prokofiev’s 1936 classic children’s symphony Peter and the Wolf. Just reading that name likely evokes the image of a young boy frolicking through a snowy forest to the happy sound of string instruments as a duck tags along to the sound of an oboe, and a small bird flits through the air to the sound of a flute.

In the eight decades since Prokofiev first created his classic, actors and musicians from around the world have been putting their own spin on Peter and the Wolf. There was a version that took place in the forests and countrysides of Austria, a version that mimicked a gangster’s tale in the style of Hollywood films, ballets, and even a recent version that employed big band music.

Petra and the Wolf, A Modern Retelling

The latest version to hit the stage is called Petra and the Wolf from Lionheart Youth Theatre. This creative, new tale has a lot in common with the 1936 classic: similar characters (there’s a young child, a duck, a bird, a cat, an old man, and a wolf), similar themes (being brave and standing up for what you feel to be right), and music is integral to the way the story is told.

But that’s where the similarities end. Petra and the Wolf is an updated retelling where a mischievous young girl, Petra, is the protagonist. Petra is the granddaughter of Peter (yes, that Peter), and they live out in the Texas wilderness. With only animal friends for companions, Petra gets into hijinks with her two buddies, a duck and a bird.

When a wolf threatens her home and animal friends, Petra has to stand up for those she loves – transforming into a showcase of bravery and compassion – even though she puts herself in danger in the process.

The story is told with no dialogue, very little narration – and large scale puppets. Yes, that’s right, the only live actor in the whole performance is Petra herself. All the other characters, including her grandpa, are puppets by Glass Half Full Theatre.

Glass Half Full Theatre is located in Austin, Texas, and creates stunning works of theater using both humans and puppets. Their stories are meant to cross linguistic and cultural boundaries and journey to the heart of imagination.

The score for Petra and the Wolf is also an original work created by a group of Austin-based artists, the band Mother Falcon. According to NPR, Mother Falcon is one of Austin’s most talked-about bands, a “little orchestra that can seemingly do the impossible.” Though a large ensemble, they have no problem blending in onstage so that they’re barely noticeable, yet still a pivotal part of the performance.

The show is produced by Lionheart Youth Theatre, a group dedicated to producing and presenting “adventurous performances for young audiences to embrace the fearlessness and imagination” of a growing generation.

A Show for the Whole Family

While Petra and the Wolf pays homage to the Prokofiev classic, it’s a show that stands on its own two puppeteered feet. With captivating visuals and a dazzling musical score, children of all ages will want to root for the spirited Petra, and learn a lesson in compassion in the process.

Make an afternoon of it by coming early or staying late to take part in a performance-themed art project provided by Art to Grow On! Tickets are still available for both performances on April 14th.