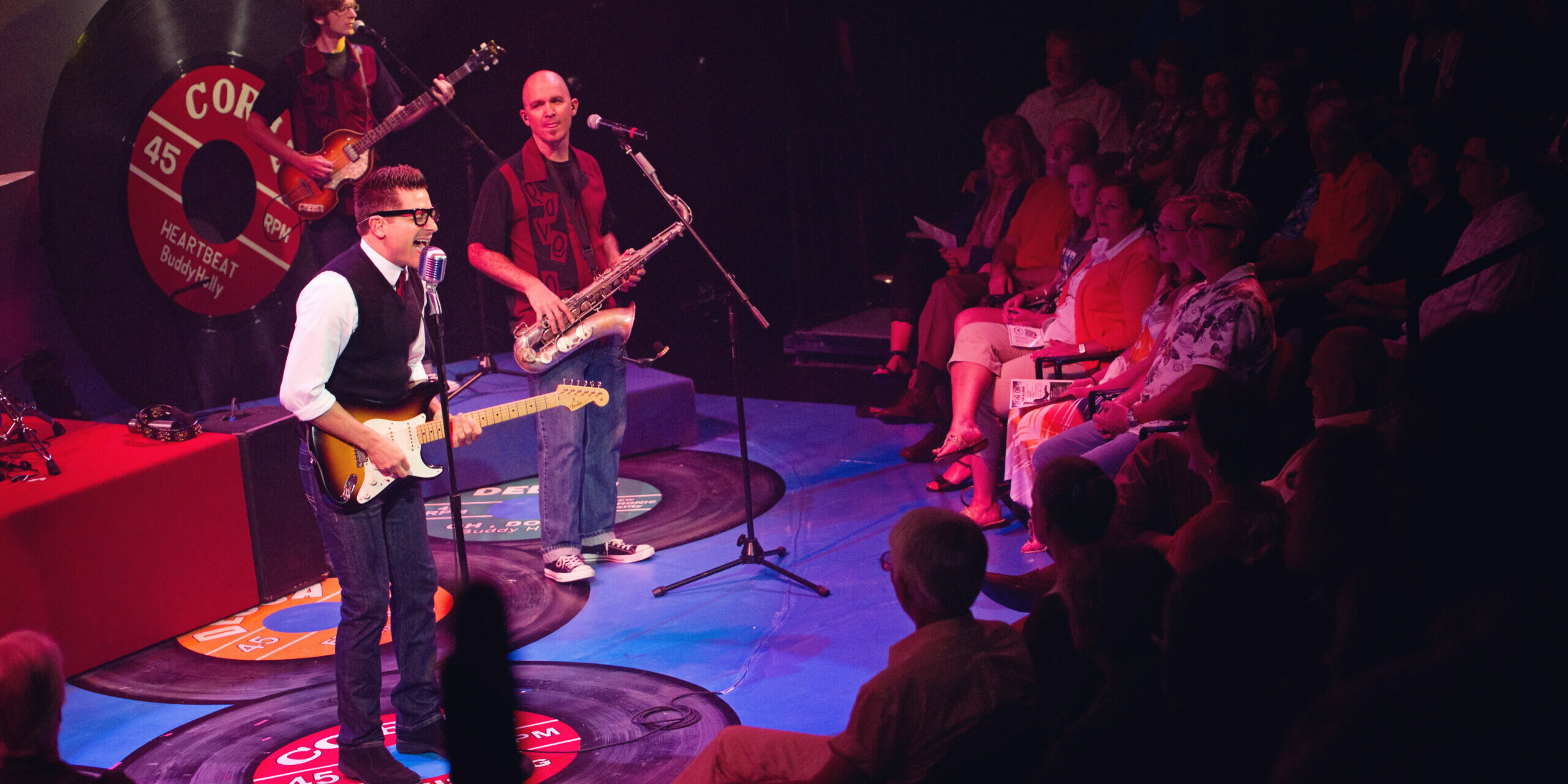 Reserve your spot for RAVE ON Friday April 28th here!

Hey, remember the 50’s?  It was a time of poodle skirts, decorative fins on cars, teenage rampage, and, most of all, rock ‘n’ roll.  Rock ‘n’ roll hit the 1950s music scene like a runaway Chevy becoming as synonymous with America as apple pie.

One of the most well-known, instantly recognizable figures of rock was Buddy Holly.  Buddy Holly may not have invented rock ‘n’ roll, but he absolutely revolutionized it before his life was tragically cut short.

The effect Buddy Holly had on music was felt all through the 50’s and 60’s (influencing the Beatles and Rolling Stones) and even into the 90’s (influencing Green Day).  Though Buddy Holly is no longer here to keep pushing the envelope of rock ‘n’ roll, his legacy lives on.

Over the years many musicians have tried to emulate Buddy through tribute shows and performances.  But according to those who actually knew Buddy, an actor and talented musician from Nebraska, Billy McGuigian, does this better than anybody.

Billy As Buddy Lights Up the Stage

Wearing Buddy’s signature style of thick-framed glasses, Billy really looks the part.  And the similarities don’t end there.  Just like Buddy, Billy grew up in a household where music was always playing he and his brothers learned to play instruments and put on performances.

As kids, Billy and his brothers would stage rock concerts for family members tailored to their specific requests for each performance.  Billy would poll the audience before starting and compile the requested songs onto a mixtape, which served as the music for the concert.

Today Billy has built a business out of creating and producing shows very similar to his early concerts with his brothers.  He and his band play songs that audiences love and can’t help singing along to, songs that hearken back to a time when life was less complicated.  He’s created four unique shows with one thing in common:  a love of good, old fashioned music.

Billy created Rave On! in 2003 for the Omaha Playhouse.  His character of Buddy Holly and renditions of the songs were so spot on that he was able to take the show on the road, performing for audiences all over the country.  It seemed like the role Billy was born to play.  Since starting Rave On, Billy has performed as Buddy more than 2000 times in the show he created.  Probably more than Buddy Holly himself.

Celebrating the Birth of an Era

While Rave On definitely pays tribute to Buddy Holly, it’s much more than a Buddy Holly show.  Billy has created a performance that brings the audience back to the place where they fell in love with rock ‘n’ roll.  He and his band pay musical homage to other legends from the era: The Everly Brothers, Richie Valens, the Big Bopper, Jerry Lee Lewis, and even Elvis.

He’s turned the ordinary tribute show into an electrifying, high-energy, rock ‘n’ roll extravaganza. That features more than 40 Buddy Holly-era classics, and celebrates the birth of an era.

You won’t want to miss the show that Tommy Allsup (Buddy Holly’s lead guitarist) called “the best Buddy Holly show out there!”

Sonny West (songwriter of Oh, Boy, and Rave On) says, “Billy is the best!”

Before the performance of Rave On, the Torrance Cultural Arts Foundation is hosting a special reception for their donors and VIPs.  This is a yearly event where TOCA says ‘thank you’ to all the wonderful people who support the events they put on.

Since Rave On is a 50s rock ‘n’ roll show, the reception will feature the Original Tommy’s burger truck serving good ole American cheeseburgers!  For donors and VIPs, the meal will be included with their ticket.  Meals will also be available for purchase to all patrons attending the show.

Dinner will include an Original Tommy’s Chili Cheeseburger, fries, and a soda for $10.  The pre-show reception will go from 6:30-8:00.

Reserve your seat here:  RAVE ON!