Rock Out With The Not-Its! 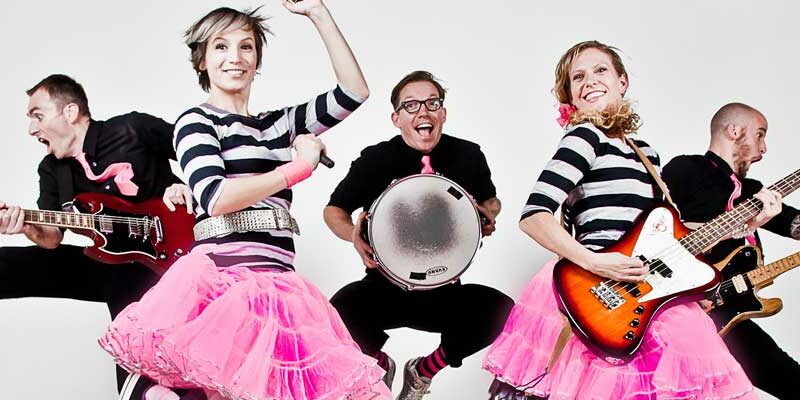 The 1990s were a special time for the music world. They saw the rise of Grunge, a cross between punk and hard rock, and the birth of the far-reaching, broad genre known as alternative rock. Indie rock, so called because of the underground, independent nature of the bands within the genre, followed in the wake of the success of alt rock, spawning bands and little-known rockers seemingly born with guitar in hand.

It was within this wave of indie 90s music that the members of Kindie Rock band The Not-Its! became part of the music scene. But as the decade came to a close, many indie rockers chose to settle down, put down roots, and start a family.

What’s a 90s rocker to do when life becomes more settled and the days of moshing and playing at clubs come to a close?

Join forces with friends who were also indie rock musicians, of course! Turn your musical eye to a new goal, like providing families with genuine rock’n’roll, then, before you know it, you’re a Kindie rock star!

The Rise of Kindie Rock

Simply put, Kindie Rock is music, real rock music that parents can sink their teeth into, paired with lyrics and themes written for children under the age of 10. Kindie bands started forming when successful adult rock artists settled down and started a family, but still loved creating music – and hated the dumbed-down music available for their kids.

And that is exactly how The Not-Its! came into being. In the early to mid 2000s, Sarah Shannon, Danny Adamson, and the other members of The Not-Its! started having kids around the same time. They had all become friends when Sarah’s husband (who was also a musician in the 90s) introduced her to Tom and Danny, and they often spent time together, lamenting that they no longer played music like they used to.

They also lamented the lack of quality kids’ music available at the time. There wasn’t music available for children that also appealed to a grown-up’s tastes. The kids’ music out there was watered down and overly simple, which is fine (Sarah and Danny were both quick to point out), but gets old, fast.

As the members of The Not-Its! spent time together, an idea began to form. Danny always played guitar and sang to kids at night, and they loved it when he would make songs up. What if they started their own full-on rock band playing music they loved to play, but with lyrics and themes geared towards kids?

And that’s exactly what they started to do.

The Not-Its! found themselves at the forefront of the Kindie Rock movement in Seattle, opening up a whole new world of making music for families.

From the very start, the members of the Not-Its! have been laser focused on producing high-quality songs (and videos). They’re able to do this because they all have “day jobs” and playing with The Not-Its! is really their passion project. What that means to them is that they don’t have to pander; they can create music the way they want and only play in shows they think will be fun.

“We’re friends first and we like to keep things fun,” said Danny. “We were lucky to be at the forefront of the Kindie rock movement, and to be in a place that had a budget for arts enrichment.”

Music, especially live music, has been shown time and again to be beneficial for growing brains. All the members of The Not-Its! love to share live musical experiences with kids.

“Seeing music played live, and played well, makes you think ‘how can I learn to do that?’,” Danny said.

“Music is about connection and, you know, I remember my parents singing Beatles songs to me. It’s about connection and love and empowerment. Music is about empowerment. Music has this amazing ability to help your brain, especially young children, if they’re exposed to music early, it’s really great for brain development,” said Sarah, told the Portland Radio Project. “Singing a song with your child or dancing with your child is a fundamental connection, like rocking out!”

A Not-Its! show is a great experience for the whole family. In fact, Sarah and Danny say that for many of their young audience members, it’s their first real rock-show experience.

“It’s very participatory,” said Sarah. “Lots of energy, lots of jumping around. Kind of like a Pixar movie – super fun and engaging but also visually awesome. We’ve got lines that are funny for parents that the kids don’t get, and we ask the crowd to join in on a lot of our songs. We can be your pre-nap show! We guarantee that your kids will nap at the end of it!”

The members of The Not-Its! have definitely got an indie rock pedigree. Lead singer Sarah Shannon sang for Sub Pop’s Velocity Girl and had a solo career; guitarist Danny Adamson played with “a ton of bands that nobody has ever heard of” including Waffle Stomper, The Green, Merkin, Kentucky Pistol, and Kill Sadie; bassist Tom Baisden has played with Action Patrol; guitarist Jennie Helman played with Micro Mini; and drummer Michael Welke played with 90s band Harvey Danger.

With decades of playing and writing music behind them (and hopefully decades more in front of them), The Not-Its are starting to work on their seventh album.

“I’m feeling excited about it! I didn’t know I had seven albums in me, not that I’m doing all the work,” Sarah said. “It’s exciting to write again and go through the process of working out songs. It’s a team effort, which varies depending on who’s bringing the song. Danny is more organized and has it structured in his mind going into it. But other times people will come with a lyric idea and we’ll write the music around it.”

As part of Seattle’s Kindiependent Collective (along with Caspar Babypants, The Harmonica Pocket, Johnny Bregar, and Recess Monkey), The Not-Its are a full rock band playing music that’s a little more “in your face” and not the usual kid fare. But, that’s what people like about them!

Get Your Tickets to Rock Out!

The members of The Not-Its! are lovely, down-to-earth, super-talented musicians. They create kid-friendly, get-out-of-your-seat-and-jump-around kind of music, and if you’ve got kids under 10, their show is not to be missed. Grab a pink tutu (or pink skinny tie), tie on your bounciest pair of shoes, and get your tickets to see The Not-Its! February 11th!

Get Tickets for The Not Its!