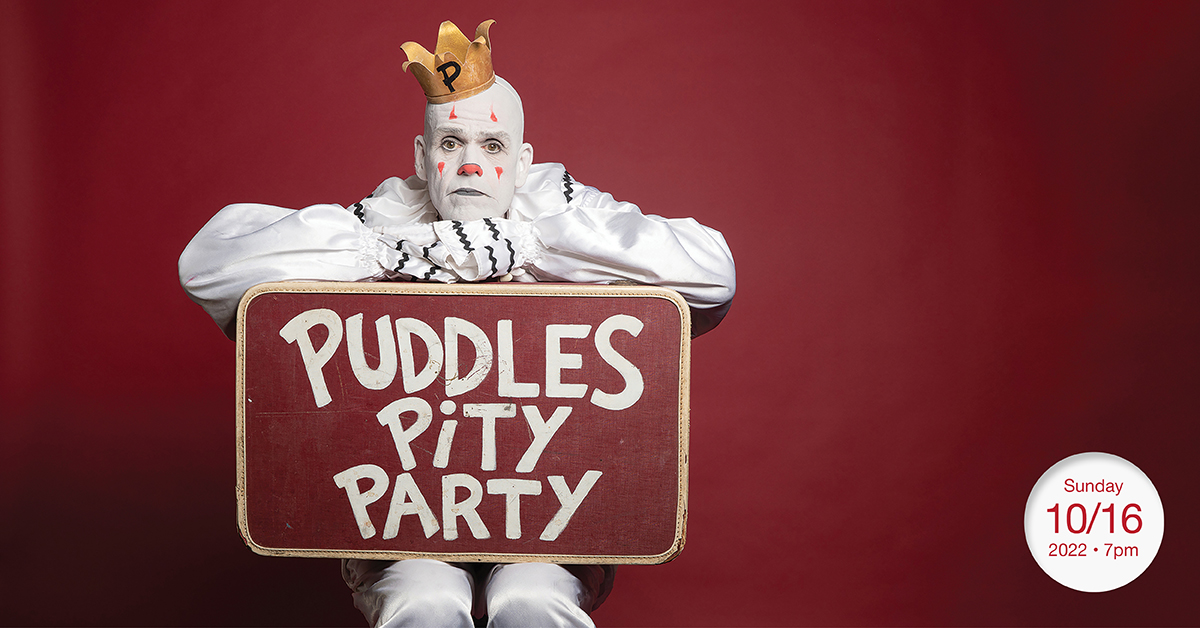 Puddles Pity Party, the 7-foot sad clown whose golden voice is comparable to rock legends like Tom Jones and Freddie Mercury, has amassed nearly 900K YouTube subscribers and performed sold out shows all over the globe including The Kennedy Center in D.C., San Francisco’s Palace of Fine Arts, London’s Soho Theatre and a residency at Caesars Palace in Las Vegas. You may recognize him as a finalist on Season 12 of America’s Got Talent and on the 2020 season of AGT The Champions, as well as his viral video collaborations with Postmodern Jukebox. Deftly combining melancholia with the absurd, Puddles has received endorsements and accolades from musical comedy legends like Eric Idle, Jack Black, Paul Reubens, Drew Carey and Weird Al Yankovic.

Over the course of the pandemic, with touring cancelled, Puddles holed up in his studio and produced 14 episodes of his “Still Sequestered” show which featured such esteemed and varied guests as Jack Black, Penn Jillette, Howie Mandel, Michael Stipe, Cait O’Riordan, Michael Des Barres, Neil  Hamburger, David Dastmalchian, Dave Hill, Mastodon, Tim Heidecker, Steve Agee, Piff the Magic Dragon, Petra Haden and Mark Ryden. Puddles also came out with his own blend of coffee for Batdorf & Bronson, recorded a new CD titled “Songs That Got Me Through the Plague” and launched the first issue of his satirical “Puddles Pity Party Informational Magazine”.

Puddles has had an action-packed 2022, with a guest appearance on the season four finale of ABC’s The Conners and performing a duet with legend Eric Idle on “Homeward Bound: A GRAMMY Salute to the Songs of Paul Simon” filmed for CBS. He has three different tours happening this year, one featuring Dave Hill, another with Piff the Magic Dragon and another with Tenacious D. And he recently collaborated on a record with pals Dave Hill, Steve Agee and Jonah Ray at the famed Rancho de la Luna recording studio in Joshua Tree.

UPGRADE YOUR PUDDLES EXPERIENCE WITH VIP TICKETS!
A very limited number of VIP tickets are available! Your VIP ticket includes:

Here's what others say about the Puddles Expereince:

“It seems like a parody. But when Puddles opens his mouth to sing, it’s beautiful. Operatic.”
- The Boston Globe

“His special effect is a textured voice laced with melancholy…what makes him transcend the
trope is his vulnerability.” - The New York Times

“Clever and often hysterically funny… (Puddles) is ideally suited to songs popularized by belters old and new like Tom Jones, Sia and Celine Dion, all of which he performs with tear-jerking bravura…” - LA Weekly

“What a voice he has. Brilliant man. Love him.” - Eric Idle

“Puddles Pity Party is the damndest thing…If I could sing like that, I’d never shut up.”
- Michael McKean