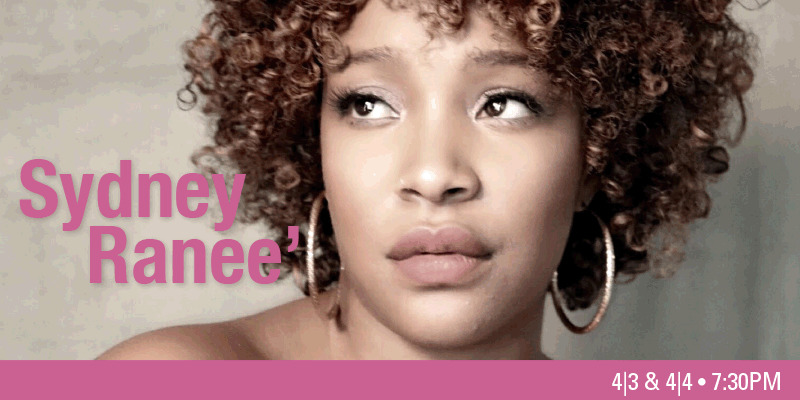 Click here to get front row seats to hear Sydney Raneé on April 3rd or 4th at 7:30 pm!

Sydney Raneé, a singer, songwriter and producer from the LA music scene, knew from an early age that she was meant to be on stage.

According to her mom, she was singing since before even taking her first steps, drawn to music as if compelled by an invisible force. By the age of 10 she was enrolled in a performing arts school, learning more about her craft each day. And at 14 she was chosen to be a backup for pop star Josh Groban at a few local performances (including on The Tonight Show With Jay Leno) and one of his music videos.

“It started at a very young age. I’ve been at a performing arts school since I was about…10 or 11. At that school they really emphasized on having us do live performances, especially for the holiday season we’d do a lot! Then I went to a performing arts high school, LA County High School of the Arts. My freshman year, I was selected out of the group to do back up for Josh Groban, and we did the Jay Leno show and a couple other performances with him. It was just amazing being 14 years old and singing with a pop superstar,” Sydney told Grown Folks Music during an interview in 2018.

Though it’s been a few years since then, Sydney hasn’t stopped singing, writing songs, and performing, all in hopes of continuing to grow her blossoming career. And now she’s coming to Torrance in April as part of the Studio Cabaret Series.

In a city like Los Angeles where the music scene is crowded with talented, diverse artists, it can be hard to stand out. But in recent years, after traveling the world performing on a cruise ship, Sydney has found her sound and has started writing more songs, and producing her own singles.

“In today’s music field, there’s a lack of female songwriters and producers, and I took on songwriting and producing to change those numbers. I try to let my songwriting and voice tell a story…I believe that music is magical and I hope to inspire with my music,” Sydney said during an interview with VoyageLA.com.

Though she loves writing songs, songwriting is not her first love. Sydney loves singing – and performing. She recently discovered her personal sound, R&B/Soul with some funky jazz and a touch of rock, and she loves bringing that to the stage with a live band.

“I could sit here and produce all the music I want, but I do feel it’s very important to make a connection with your audience, to put on an experience for them. Whether it’s me doing my original music, or covers like I do on the cruise ships, I just think it’s important for the audience to feel connected to the artist in some way,” Sydney told Grown Folks Music.

“Touring, domestically, I would love to tour internationally. I’ve been so many places with the cruise ships and seen so many audiences around the world…I would love to open that up and perform in different countries…I would love to write for other artists, too. I have a lot of songs that come to my mind, I don’t think they’re necessarily my style, but I think they’re good songs. So I would like to open up and possibly write for other people, too,” Sydney told Grown Folks Music.

Now you experience the music of the sultry songstress for yourself as she takes the stage in April at the Nakano Theatre.

Join Sydney Raneé on April 3rd and 4th as part of The Studio Cabaret Series! The Studio Cabaret Series is a way to enjoy musical talent and tasty food in an intimate setting; it’s like dinner theater for your ears! The performances are set at four-seat cocktail tables, and gourmet meals are available for an additional cost. Meals for the series this season are prepared by the talented chefs at the Red Car Brewery.

Get into the sweet sounds of the sultry songstress! Sydney Raneé will be performing on Friday, April 3, and Saturday, April 4, 2020, at 7:30 pm. Tickets are on sale now!

Get Tickets to Sydney Raneé!