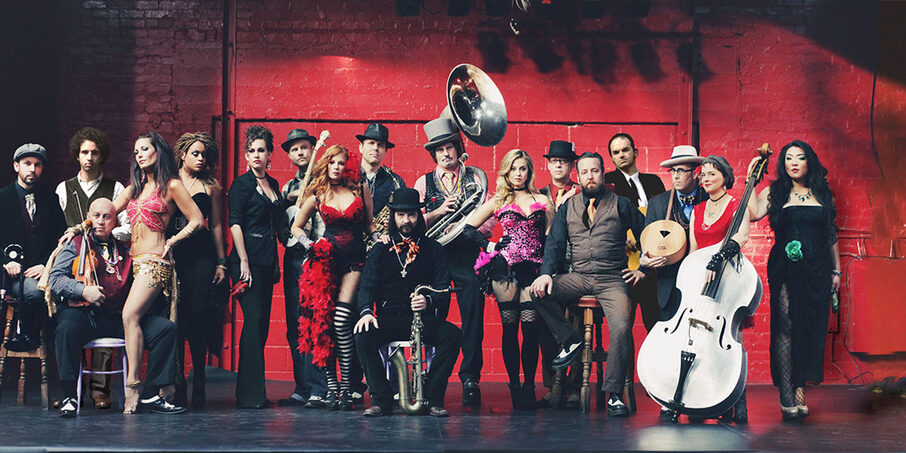 Get tickets to see Vaud & the Villains on October 21st by clicking here!

The lights are warm and dim, the air smoky. Before the show starts, before, even, the musicians fill the stage, a low hum of excitement crackles around the room. When, finally, the stage is filled nearly to bursting with horns, guitars, drums, violins, and banjos, there is an indescribable sizzle, like a flame speeding down a wick towards a powder keg. And then, with the first notes, the first beat, the first strum, the keg explodes into a show of high-kicking leggy dames, sultry torch singers, and a modern take on New Orleans jazz.

This is a Vaud & the Villains show. Part circus, part revival, part get down, it’s a show like nothing you’ve ever seen before.

Every Villain Needs An Origin Story

Vaud Overstreet, the main snake oil salesman, the traveling medicine man, the MC for the evening’s entertainment, is played by Andy Comeau. Andy spent 20 years as a working actor, getting parts on some of TVs hottest shows, when he and wife Dawn Lewis (who plays Peaches Mahoney in the show) were looking for a big rocking band for their wedding.

They found a band, but it wasn’t the show they envisioned. And then one night, while drinking with a buddy who happened to own a club, Andy and Dawn came up with the idea that became Vaud and the Villains. The club owner loved the idea and booked them on the spot. Even though they had no experience with how to create a band or a show like they pictured, they agreed to do it.

The idea was so intoxicating, so interesting, it seemed to have a life of its own. Pieces started falling into place, slowly, clumsily, as Andy and Dawn searched for musicians to help make their vision come to life. They put out an ad on CraigsList and soon a line of musicians were clamoring to be a part of the magic. It was an idea that really spoke to people, connected people. Americana noir meets Moulin Rouge, a rousing cabaret show disguised as a gritty traveling medicine show.

Dawn and Andy may have been unfamiliar with the specifics of how to put together a show this big, but they knew exactly what they wanted: a high-energy show full of love and diversity, something fun and over-the-top, with just a tinge of innocent sexiness.

And, boy, did they hit the nail on the head.

The Music of Vaud & the Villains

Over time as the merry band of villains has evolved one thing has remained the same: they attract high-quality musicians. Vaud & the Villains is currently in its fifth iteration of musical talent and boasts an impressive 19 piece orchestra (it’s not a big band, but a large one).

When it comes to finding the right talent, Dawn said, “We’ve gotten a lot better at choosing the best people to fit in with us. The time spent on stage is so small relative to the time spent traveling on the bus or rehearsing. You’ve gotta love being with these people, otherwise it comes off as hollow onstage.”

From the beginning Andy has filled the role of producer. He started out choosing the songs and working on the arrangements. But others are also encouraged to suggest songs, and both Andy and Dawn have written their own songs. In fact, they put out an album of entirely original music not too long ago.

Every Saint Has a Past, Every Sinner Has a Future

Over the past decade, Vaud & the Villains have played some really huge venues (Cannes Film Festival or Hollywood Bowl anyone?), festivals, and dive bars. But no two shows are ever the same.

When asked to describe what the audience can expect, Andy replied, “You can’t miss it. There’s an energy to our show that makes people come alive. I can’t explain it any better than that. It’s something you really have to experience for yourself.”

Get Tickets for Vaud & the Villains

Vaud & the Villains are performing for one night only. Come and experience the magic and energy of Vaud Overstreet, Peaches Mahoney, and their merry gang of misfit musicians.

Get Tickets to Vaud & the Villains!