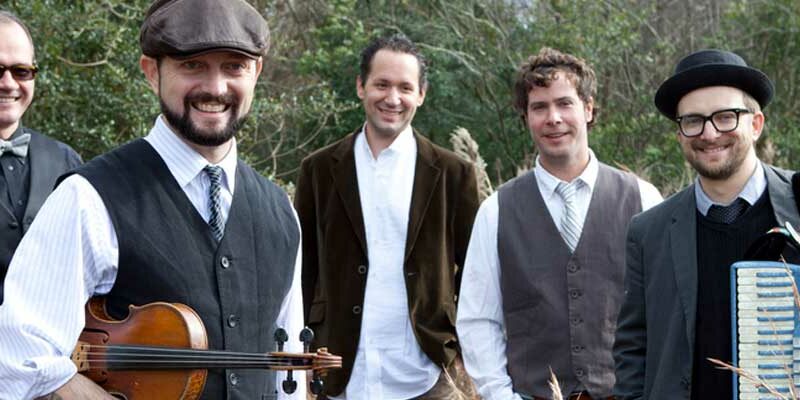 Get tickets to see Velvet Caravan on March 2nd or 3rd, 2018, by clicking here!

You most likely know jazz, swing, and big band music. You might even know gypsy music. But have you ever heard of gypsy swing?

Gypsy swing, or gypsy jazz, is a type of “hot club jazz” that was started in France in the 1930s by Manouche gypsy Django Reinhardt. Django was known at the time as a guitar virtuoso, playing all around Paris with Romani guitarists. He had a unique playing style thanks to his exposure to early live jazz recordings. But one day after hearing a recording of Louis Armstrong, he started to tweak his technique to go along with the new jazz style.

Though it’s been almost 100 years since Django Reinhardt made gypsy jazz famous, the music is more popular than ever. So popular that it brought together two unlikely musicians from across the world – a classical violinist from Venezuela and a guitarist from Slovenia.

The Siren Call of Gypsy Jazz

Ricardo, one of the original members of Velvet Caravan, grew up in Venezuela playing the violin – and with passion for orchestra music. He dropped out of school at 15 to become the youngest violinist in the Venezuelan Philharmonic Orchestra. Music took him all over the world, which is how he ended up in Savannah playing with the local symphony.

“I fell in love with the people and city and space of Savannah,” Ricardo said. “When the symphony went belly up, I didn’t want to move away and find another orchestra job. And I didn’t want to freelance (too unstable). So I started a company that provided live music for events. Music for cocktail places, corporate events, jazz! It was a good opportunity for me to try other styles of music. I hired amazing musicians and got to learn on the job.”

While growing up Ricardo had heard about gypsy jazz, but until he met Sasha Strunjas, he had been too intimidated to try playing it. Sasha had made a name for himself as the lone gypsy jazz musician in Savannah. Ricardo and Sasha got along well, and soon Ricardo found himself learning the art of gypsy jazz.

“I’d been very interested in gypsy jazz my entire life. I mean, look at Stéphane Grappelli and what he can do on a violin without any music in front of him! I started playing jazz, but it was straight ahead jazz. When I first met Sasha I had to work really hard to keep up with him,” Ricardo said.

At first Sasha and Ricardo mainly played restaurant gigs. But soon they had developed a reputation of their own, and as they grew a following, other local musicians were vying to play with the famous gypsy jazz duo.

Gypsy Swing With a Southern Twist

“Eric came in with the bass, he was the first to come in. He had never played jazz before, he just had raw talent and a good ear and he learned really fast,” Ricardo said. “Then, every time someone came into the band it was more about what that person brought in. Their personality was more important than their knowledge.”

Before they knew it, they were a quintet, not unlike the gypsy jazz groups from days of yore. They created a show to tell the story about how gypsy swing music came to be following World War I.

Ricardo still tries to bring the feel of a real European gypsy jazz experience to all of their shows. When they were first starting out, he would stand on tables and play, but now he simply tries to keep up a high level of energy to make people feel like a part of the show.

If you’re interested in learning more about the history and influence of gypsy jazz after the first world war, check out his weekly radio show on WRUU, called “Gypsy On My Mind.” In it he talks about gypsies and the similarities between gypsy jazz and klezmer and even flamenco.

The Evolution of Velvet Caravan

Over the past couple of years Velvet Caravan has changed a lot. They’ve started traveling more, taking their unique sound to bigger venues around the country. They introduced a new guitarist after Sasha had to relocate to Nashville for work. They’re starting to add singers to their shows. And they recently finished recording their second album.

But no matter how they evolve as a group, one thing remains constant: the music and the history.

“During our shows I talk in between songs to give a bit of background about the music. [Gypsy jazz] is jazz, but the songs are short and sweet, high energy, get to the point right away, and are a lot of fun,” Ricardo said. “The audience ends up feeling very connected to us and the songs because they understand where we’re coming from.”

What makes gypsy jazz unique from American jazz can be traced directly back to Django Reinhardt. It’s his rhythms, his chord progressions, even his instrument, that made the difference.

Don’t get left behind – come experience for yourself the gypsy jazz stylings of Velvet Caravan!

Get Tickets to See Velvet Caravan