Your Name, the highest-grossing anime film in Japanese history, is the story of two teenagers from vastly different worlds who end up swapping bodies after seeing a mysterious shooting star. While the idea behind the film might invite comparisons to Freaky Friday, 13 Going On 30, or Big, the story of Your Name is different, spanning distance – and time. 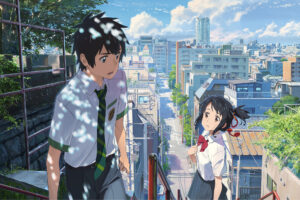 The main characters, Mitsuha and Taki, lead very different lives. Mitsuha is a high school girl who lives in the rural, mountainous Hilda region of Japan, while Taki is a high school boy living in bright and busy Tokyo’s.

After seeing a shooting star, Mitsuha and Taki find themselves switching bodies from time to time. Each time they switch bodies they have to adjust their lives around one another. They build a connection by leaving each other little messages, and eventually decide they want to meet.

But distance isn’t the only thing keeping them apart, and an unexpected twist puts an end to the body switching. The film is a blend of gorgeous, realistic detail and emotionally grounded fantasy about two lives changed by fate. The rest, you’ll have to see for yourself!

Based On a Novel by Makoto Shinkai

Your Name was written and directed by well-known Japanese writer, animator, and director, Makoto Shinkai. Shinkai has been called “The New Miyazaki” by film reviewers from Anime Advocates and ActiveAnime and his work is known for detailed art direction and vibrant colors.

Shinkai got his start while still a teenager as member of a juvenile literature club where he drew picture books. He later worked for video game company Falcom creating video clips and graphics for online content.

His first film short, She and Her Cat, won several awards during its debut in 2000. His next films also won critical acclaim and he was soon working on multiple animated projects, commercials, and animating visual novels. He continued making feature-films, and released Your Name in August of 2016 at the Anime Expo in Los Angeles. To date the film is not only a critical success, it has also surpassed Spirited Away as the highest-grossing anime movie of all time.

Director J.J. Abrams recently announced that he and screenwriter Eric Heisserer will be working on an American adaptation

Japan’s #1 film of 2016 is coming to Torrance for one night only – and is FREE to watch! The film, which has been rated 98% fresh on Rotten Tomatoes, will be shown in Japanese with English subtitles. Don’t miss seeing a free showing of the film that critics have said is “…worth seeking out…” and “The absolute very best kind of crowdpleaser…”.  The showing will take place on Sunday, November 12, 2017, at 2:00 pm.