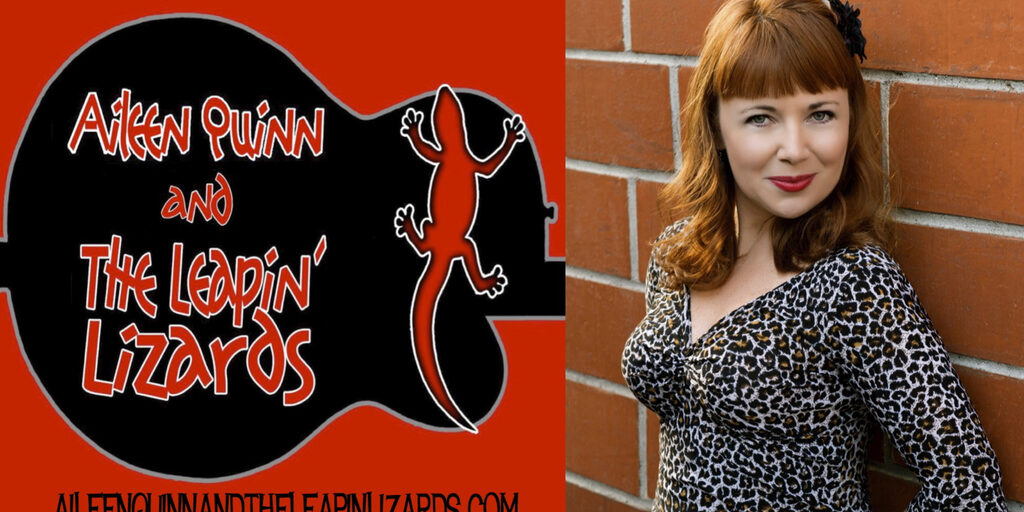 Get Tickets For Aileen Quinn and The Leapin’ Lizards November 17th or 18th here!

When you come to an Aileen Quinn and The Leapin’ Lizards concert the last thing you’re going to do is stay in your seat! Their high octane music comes courtesy of foot stompin’ groovy tunes and sassy melodic vocals.

While the band is relatively new, Aileen herself is no stranger to the stage. Her shock of red hair and mischievous grin might look familiar if you’re a fan of the 1982 Golden Globe-nominated movie Annie. When she was just nine, Aileen starred in Annie and was nominated for two Golden Globes for the role.

With a critically acclaimed performance under her belt at a young age, Aileen didn’t sit back and wait for success and fame to simply fall into her lap. She worked hard all through her teens, performing in regional theater productions and earning her degree from Drew University.

Throughout her adult life Aileen has starred in national Broadway theater tours, off Broadway productions, and had roles in small indie films. She studied Shakespeare in London, appearing in two of Shakespeare’s plays for the London Academy of Music and Dramatic Art, and has toured with productions all across the United States.

Oh, and she started a rockabilly and swing band, aptly named Aileen Quinn and The Leapin’ Lizards.

Aileen, along with drummer Tom Murray, formed the rockabilly/swing/blues band in 2012. The band’s debut album Spin Me was released in 2015 and included all original material.  Members of the band include Aileen on lead vocals with a sassy, sexy singing style, Tom Murray on drums and vocals, Matt Pensabene on bass, Frank Giffen on guitar, Jorge Reyes on sax, and John Piechowski on harp.

Between all six band members they have decades of stage and studio experience and are the perfect foundation for Aileen’s amazing vocals to really take flight and get audience members on to their feet.

Today you can find Aileen Quinn and the leaping lizards performing all over the United States at at festivals, fairs, conferences, private parties, and clubs (like the famous Whisky A Go Go in Los Angeles). At their performances they cover rockin’ songs from the 50s and 60s, as well as their own original music.

In an interview with the Now Hear This podcast about her choice of Rockabilly music, Aileen said, “I got into this kind of music kid of later in life, too, based on a rockabilly women in music back in the day, and when I saw how spirited and passionate they were I was like ‘it’s really good!’ …Rockabilly has all those great roots, it has all that country in it and that R&B kinda thing. It has a lot goin’ on that you can bounce off of so I love it myself!”

Aileen Quinn has come a long way since stepping into the spotlight as the loveable orphan Annie. She’s spent her life performing, learning, recording, and teaching. If you don’t find her jump, jive, and wailin’ on stage with the Leapin’ Lizards, you can probably find her teaching a master class in drama and musical theatre.

Last June at the inaugural South Bay Festival of the Arts Aileen Quinn and The Leapin’ Lizards had the crowd on their feet, dancin’ and swingin’ to their spirited songs.

Don’t miss your chance for foot stompin’, rump waggin’ fun with Aileen Quinn and The Leapin’ Lizards as part of the Torrance Cultural Arts Foundation’s Studio Cabaret series! Relax in the intimate setting of the George Nakano Theatre and enjoy a delicious dinner from Chef Peter Carpenter of Gourmet to You. The menu will include penne bolognaise, grilled zucchini & peppers, and arugula salad with red onion, radish, cucumber, and toasted almonds. And don’t forget to stop by the lobby for a tasty treat from the Torrance Bakery.

Get Tickets for Aileen Quinn and The Leapin’ Lizards!