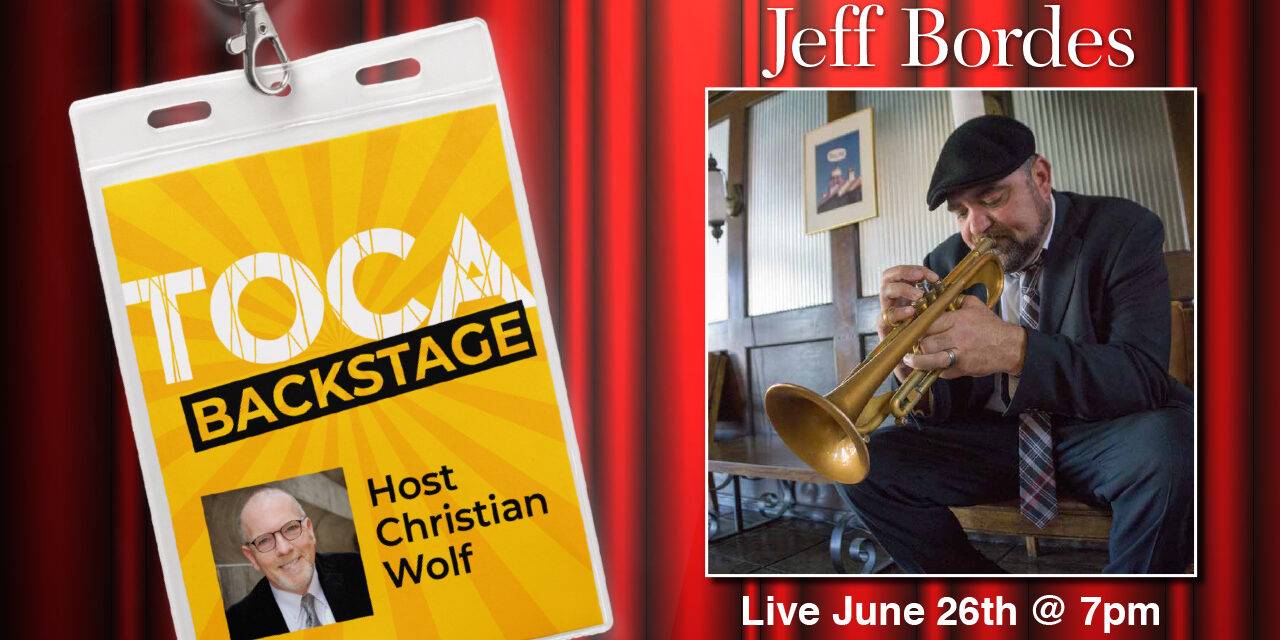 TOCA’s SouthBay Festival of the Arts was supposed to be on Saturday June 27th. However, due to the Covid 19 pandemic, we had to cancel the event. Still, with all that’s going on in the world, we’d still like to share the arts with you that weekend.

On Friday June 26th at 7pm, TOCA will be presenting a live concert, streaming on Facebook. Jeff Bordes is an amazing musician who has appeared on our stages. Together with his guitarist, they will be streaming live from Jeff’s porch in Northern California.

It was a pleasure to speak with Jeff about his music and what you could expect during the concert and it will be as close as your screen. Just follow us on Facebook.

Want to make it a full arts festival in your home? Here are some other streaming shows available to you during the weekend of June 26 – 28th

The GPM features 3 pianos, storytelling, multi-media, audience participation, an all-star band, back-up singers and hit songs including “Good Golly Miss Molly,” “Georgia on My Mind,” and “For Once in My Life,” to  “Great Balls of Fire,” “Bennie & the Jets,” “Scenes from an Italian Restaurant” and (of course) “Piano Man.”

The Red Hot Chilli Pipers’ all-star band includes the world’s finest bagpipers and world-champion drummers – who have rocked the world from New York to Beijing to Melbourne (and everywhere in between).  Their global legions of fans include over 375,000 Facebook followers and multi-millions of YouTube viewers.

It is not often that a group of vocalists can literally TAKE YOUR BREATH AWAY.   However, NATURALLY 7 does (with ease).

An act like this world-renowned group comes along just once in a lifetime.  They guest starred on three world tours with Michael Bublé, one world tour with Coldplay, and won Best Vocal Group last year on CBS-TV’s prime time show World’s Best with James Corden.  They perform a mix of Pop, Rock, and R&B tunes….stunningly recreating the sound of a full band using just their voices…which has earned them the reputation as “The Human Instruments.”

One Night in Memphis (a half-hour excerpt)

John Mueller’s ONE NIGHT IN MEMPHIS: The #1 Tribute to Presley, Perkins, Lewis and Cash.   This high energy production takes you back to December 4, 1956, the night when four of the biggest names in early rock and roll — Elvis Presley, Carl Perkins, Jerry Lee Lewis and Johnny Cash – gathered together for an impromptu jam session at the legendary Sun Studios in Memphis.    This tribute to that memorable night features nationally acclaimed cast members who have an uncanny sound, look and feel of the original legends; the production also features an authentic and energetic rockabilly backup band.  Your audience will feel as though they are witnesses to a rock and roll royalty jam session with the legendary performers whose music has stood the test of time.

Classic Rock’s unique supergroup of legendary side men – have produced for WSFU PBS in Tallahassee, FL.   This dynamic “rockumentary-style” film features concert footage from a sold out March 2020 performance at the Barbara B. Mann Performing Arts Hall in Fort Myers, FL interspersed with interviews with the five members (who were recipients of the first-ever Musicians Hall of Fame and Museum™ Road Warrior Award).  The prestigious Hall of Fame Award was given to them to honor “their years of dedication to the music, and the countless miles that they have traveled in delivering so many hits throughout the world.”

THE HIT MEN recorded and/or performed with the artists whose hits they play in their spectacular multi-media show – some of the biggest names in rock history including Foreigner, Journey, Toto, The Who, The Rascals, 3 Dog Night, Frankie Valli and more. Not only do THE HIT MEN play the hits they helped rocket to the top of the Billboard charts, they also share fascinating backstage stories about their days on the road (and in recording studios) with rock royalty.

LEE ROCKER made his mark singing, playing, standing on, spinning and rocking his giant upright bass as a founding member of the Grammy-nominated Rockabilly-revival music group, the STRAY CATS, who sold over 10 Million albums and had 23 Gold and Platinum-certified records worldwide!

Two years ago, Lee and his all-star band were invited by Daryl Hall (of Hall and Oates) to perform an intimate listening-room show at the world-famous New York venue, Daryl’s House….and we are fortunate that the full performance was captured on film!

‘The course of true love never did run smooth.’

A feuding fairy King and Queen of the forest cross paths with four runaway lovers and a troupe of actors trying to rehearse a play. As their dispute grows, the magical royal couple meddle with mortal lives leading to love triangles, mistaken identities and transformations… with hilarious, but dark consequences.

Directed by Nicholas Hytner, this production of A Midsummer Night’s Dream saw the Bridge Theatre become a forest – a dream world of flying fairies, contagious fogs and moonlight revels, surrounded by a roving audience following the action on foot.

Bright lights, lavish parties and the height of fashion at every turn. But at what price?

Composed at the height of the Belle Epoque, Jules Massenet’s bright, sensual opera follows a pair of not-so-innocent young lovers as they tangle with the toast of Paris, inviting dangerous consequences.