The Life and Deceptions of Steve Valentine 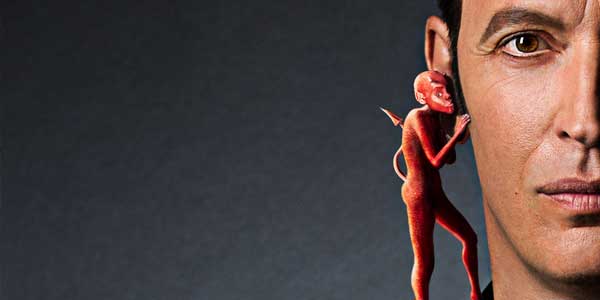 There are a lot of words you can use to describe Steve Valentine – thespian, magician, renaissance man – but probably the best way to describe him is as an all-around world-class entertainer. He has garnered accolades and acclaim as a voiceover artist for video games (as the infamous King Alistair from BioWare’s Dragon Age), an actor in multiple TV shows (like NBC hit Crossing Jordan), and as a sleight of hand magician.

His storied life began in the UK where he was born in 1966. His mother was a dancer and actress before she settled down to raise her three children, so Steve has said it feels like performing is in his blood. “I’ve always had it in my blood that this is who I am and I haven’t been able to give it up.”

The Road to Fame Started With a Child’s Toy

During an interview with VO Buzz Weekly (check out the video below), Steve said, “When I was, gosh, my mother wanted to join this catalog club, so she bought my brother some toy soldiers, me a kid’s magic set, and my sister a chemistry set, and that was how she joined the catalog club. [The funny thing is], I do magic for a living, my sister is a renowned scientist, and my brother has been in the army for over 26 years.”

He continued, “I remember getting the magic set and getting hooked on this idea of ‘oh oh look at me.’ I did my first show when I was six in my garage and no one showed up because I didn’t know about advertising. I just assumed, I told one friend ‘can you tell everyone I’m gonna do a magic show?’ And no one showed up, and it’s been uphill from there.”

It was that magician kit that started Steve’s lifelong love affair with performing magic. He worked to master the tricks in the kit and even put together a magic act that he performed at his school and Sunday school. Steve also studied and trained as a dancer until he was 16 years old. During dance shows he learned that by performing his magic act he could get a few extra minutes in the spotlight. So he brought his act to the stage.

“Every year we did a dance show and I found out that if I did a little magic act I could get an extra 5 minutes in the show. So I put an act together,” Steve said.

At the age of seven a drama troupe came to perform at Steve’s school. They asked if anyone wanted to be in the play and Steve said, “I’ll do it!” His one line in the play got a big laugh from the audience – and from there, he was hooked.

(This video interview is fabulous, but long, and may contain some NSFW language)

Taking the Show on the Road

By his mid teens Steve was traveling around Europe Deejaying and performing magic shows every night. He spent his time in an exotic, seaside location and when it came time to return to his home in England, he discovered he couldn’t stand the thought of facing the dreary, wet weather.

Instead, he auditioned to perform his magic act on a cruise ship. His act, though not well-liked by the hiring manager, was enough to get him hired. It was his ticket out of England, and eventually, into America.

The Magic of Hollywood

Steve had known since he was a wee lad that he wanted to be an actor, and, like all young, naive newcomers to Hollywood, he thought it would be as simple as showing up.

It took many years for Steve to break into the business, but he worked at it every day. He took odd jobs and kept performing his magic act to keep afloat.

His first job with an actual speaking part was in the TV show Married…With Children. From there he kept pushing to move his career forward, from parts with less than five lines to a guest spot to a recurring character to a series regular. To date he has over 250 hours on camera in everything from crime dramas (Crossing Jordan) to Disney XD series (I’m In the Band) to movies (The Walk). He writes and produces shows, too.

Through all of this his first love, magic, had to take a back seat. However, when his career finally hit a point where he could breathe a bit, Steve’s wife asked an important question, “What do you want to do?”

Steve had started to fall back in love with performing sleight of hand tricks, and he played around with the idea of building a one-man show. To fund his burgeoning idea, Steve created a Kickstarter crowdfunding campaign and raised several thousand dollars more than he set out to.

It was full steam ahead from there. He got to work writing the narrative and forming the structure of his show, intertwining the magic into story. He worked with a set designer to create a custom look for his one man show and even searched antique shops for vintage magic props that had inspired him as a kid.

The final result, Life & Other Deceptions, opened to much acclaim and adoration from audiences and critics. His comedic timing and charming storytelling, combined with his unbelievable magic tricks, have made his show a huge success.

His show, Life & Other Deceptions, has been called “hilarious, amazing, one of the best magic shows ever” and he will be performing for two nights only at the George Nakano Theatre. Get your tickets before they disappear!

Get Tickets to Life & Other Deceptions