Backstage With the Beatles – An Intimate Look at A Beloved Band 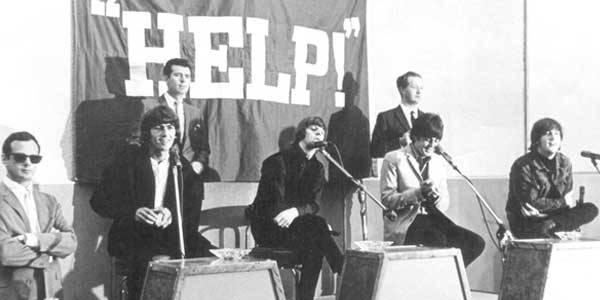 Get your tickets to see Backstage With the Beatles on January 27, 2018

Back in the 60s, four mop-haired youths unintentionally started a mania – Beatlemania. And it spread like wildfire from the United Kingdom to Europe and, finally, to the United States.

After their astounding success on the Ed Sullivan Show (where almost 40% of Americans tuned in to watch the Fab Four), it only took two short weeks for them to become fully entrenched in the American pop culture scene. They were mobbed by teenagers everywhere they went, girls screaming at the sight of them, boys coming to blows to get a better view, and performances were often drowned out by the sheer volume of enthusiastic cheers and even crying.

It was their performance on the Ed Sullivan show that changed the course of American music forever. It paved the way for a British invasion on the American music scene and turned teenagers everywhere into raving lunatics.

The First Wave of the British Invasion

In the midst of all that craziness, a beloved DJ from the LA radio station KRLA became the Los Angeles concert producer for The Beatles. Another well-known promoter, Lou Robbin, turned down the chance to produce Beatles concerts, and Bob Eubanks recognized a golden opportunity when he saw one.

At the time, along with his radio gig, Bob was booking talent for his young adult nightclub Cinnamon & Cinders, including rising, but not yet well-known, stars like The Beach Boys, the Righteous Brothers, and Stevie Wonder. He had felt the energy and electricity through the TV when The Beatles played, and he knew he had to bring them to Southern California.

And he wasn’t messing around. Bob mortgaged his house when his loan applications were turned down by banks, raising the money he needed to produce the first Beatles concert at the Hollywood Bowl in 1964.

It turned out to be one of the best decisions of his life. All 18,000 tickets for the event were sold within four hours of the ticket booth opening. And that was before the internet, when you had to go in person to get tickets. People camped out all night, waiting for the moment they could snatch up their tickets.

Now, Bob Eubanks is the only living person to have produced Beatles concerts all three years they toured in America. And he wants to share his experiences with audiences all over the country.

Backstage With the Beatles is not your typical tribute show.

“It’s a 90-minute show where I tell stories and show pictures and videos, all with a live band on stage. I tell stories that go with the music, and then Ticket to Ride, a phenomenal band, plays the songs, live. Eighty percent of the stories actually happened to me, which makes this show truly one-of-a-kind,” Bob said.

“I have some great stories from all three years they toured in America, like how we got them out of Dodger Stadium in ‘66 (would you believe it involved the Hell’s Angels?),” he said.

Bob Eubanks Backstage With The Beatles from Noel Stevens on Vimeo.

While the rise and fall of one of the world’s most beloved bands is well-documented, it’s fascinating to hear about first-hand, personal experiences with the Fab Four from someone who was front-and-center during the height of Beatlemania.

“The first year they were inquisitive, wide-eyed. The second year, they were a little more difficult. By the third year it was obvious that they were a band who no longer wanted to play together. The Dodger Stadium concert was the second-to-last time they ever appeared together,” Bob said.

A multimedia show, Backstage With the Beatles can be enjoyed by anyone – no matter what their age. At the inaugural performance in Pepperdine, “I was surprised to see people there from 8 to 80!” Bob said.

Get On Board With a Ticket to Ride

Along with the personal stories and photos, Beatles tribute band Ticket to Ride will perform live, adding another dimension to the show.

“Ticket to Ride is really one of the best Beatles bands I’ve ever seen,” Bob said.

The members of Ticket to Ride have traveled the world recreating the live Beatles experience with authentic instruments and costumes. Members of the band include Jeff Toczynski as Paul McCartney, Gilbert Bonilla as John Lennon, David Brighton as George Harrison, and Mike Sarafian as Ringo Starr.

Beatlemania may be long over, but it seems like each generation has discovered the music of The Beatles anew. Year after year, new crops of Beatles fans rise up, lighting and relighting the torch for a band that changed the face of music forever.

Tickets Are Almost Sold Out!

Backstage With the Beatles will be performed for one night only at the James R. Armstrong Theatre. Tickets are selling out fast! Come Together to get your tickets before they’re gone like Yesterday!

Get Tickets for Backstage With the Beatles