Take a Comedic Journey Through Relationships With The Spouse Whisperer 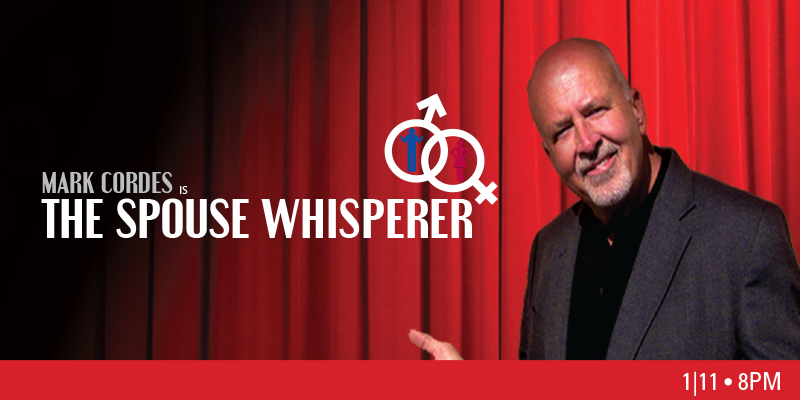 Click here to get tickets for a night of belly laughs with Mark Cordes The Spouse Whisperer on Sat, January 11, 2020, at 8:00 pm!

It wasn’t years spent studying with philosophers or scholars that started Mark Cordes on the path to becoming the Spouse Whisperer. Ironically, it was the aftermath of his first marriage that turned the former real estate agent into a comedian.

“I went through a divorce, my only divorce, and I was depressed and wondering what was going to happen, and after selling real estate one day I wandered into a local watering hole here in Arizona and had some drinks with some friends. All of a sudden at 9:00 the lights went down and it turned into amateur comedy night. We watched 20 guys get up and try to be funny, and 19 of them weren’t…when it was all over my friends said, ‘You should try that’ and long story short, the next week I tried it. I dabbled in it for a couple of years, [then] 32 years ago, I gave up the real world and chased this dream. It’s been a long crazy road, but looking back on it, I wouldn’t change anything,” Mark told Chris Wolf during his TOCA Backstage interview.

The Spouse Whisperer is a comedy show that takes the audience on a journey from love at first sight through till death do us part – and all the funny, frustrating, and downright infuriating, stuff in between.

Despite the show’s title, Mark doesn’t claim to be an expert on marriage or relationships. He’s simply an astute observer and inventive comic who used humor to help get through a rough patch – and launch a new, successful career.

“For 32 years I’ve been traveling around the country, literally coast-to-coast, 49 states, 18 countries, telling jokes. A few years ago, I realized I needed to get out of the comedy clubs and into the theaters. All the materials I enjoyed writing about and performing was all about relationships, and hence, the Spouse Whisperer was born, and it’s been a lot of fun,” Mark said.

“I love to observe relationships and everything. I see the silliness in a lot of things that other people don’t, and that’s what makes me a good stand up… I think a lot of couples get really good at arguing, and all of a sudden that’s what their specialty is. My wife and I just try to find the humor in things.”

Though he has no illusions of being Dr. Phil, Mark does have one solid piece of advice for married couples.

“Have a respect for your spouse, you’re all hopefully trying to achieve the same end game which is a long, happy life. When people get married they say ‘till death do us part’ but they evidently don’t mean it because they’re on their 3rd or 4th marriage. I often tell people that if they had come to see my show a couple years ago ‘I could have saved you a lot of alimony,’” Mark quipped.

However, if it sounds like The Spouse Whisperer is going to be an evening spent wrangling your unwilling spouse about their bad behavior, think again. This is a show that will have you and your partner laughing until your sides hurt while also thinking about the things that really matter in a relationship.

“Everybody walks away with something different, but the main thing I’m going to do is make you laugh for about 2 hours,” Mark said.

Ask The Spouse Whisperer a Question

One of the best parts of the show comes from the audience members themselves. Before the show starts, the audience is given blank comment cards where they can write questions or comments for Mark. During intermission the cards are collected, and the second half of the show consists of Mark reading the cards out loud and answering the questions or responding to the comments. Whomever asks the “best question” will win dinner and a movie for two, courtesy of Mark.

“One of the cool things I do is a little comment card questionnaire. They can ask me any question that they want, we collect them at intermission, and it’s the most fun part of the show for me. I get to find that people in Torrance are the same as Tampa, people in Seattle are the same as Boston with their questions,” Mark said.

“We find out we’re a lot more alike than people think we are,” he continued.

One thing that Mark has seen happen time and again after his shows is that more couples leave the theater holding hands than when they walked in – all thanks to a night filled with laughter and camaraderie.

“Everyone wants to be with the perfect person, well, that’s not gonna happen. We’re humans, we’re flawed. Let’s just hang on tight and enjoy the ride. I want people to forget about their problems for a couple of hours, turn your cell phone off, and sit back and laugh. Nothing feels better than a good belly laugh, and if you can string together a couple of hours of that, I think it’s time well-spent,” Mark said.

Tickets for The Spouse Whisperer On Sale Now

Enjoy a hilarious peek into the real world of relationships with Mark Cordes, The Spouse Whisperer. Tickets for the show on Saturday, January 11, 2020, at 8:00 pm are on sale now!

Get Tickets for The Spouse Whisperer!