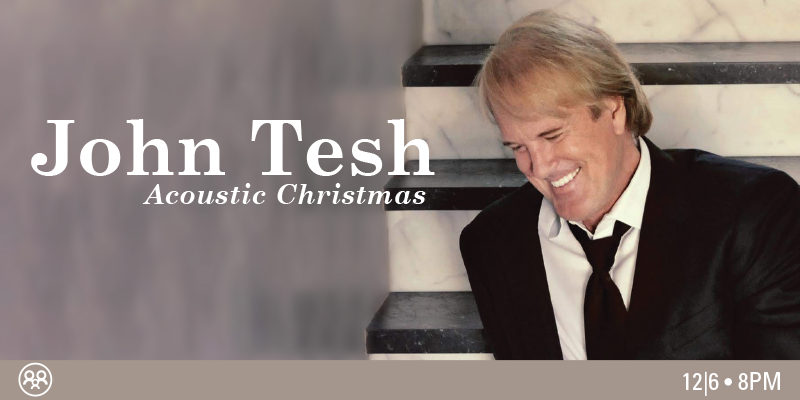 Click here to get tickets (and VIP tickets) to see John Tesh on Friday, December 6th, at 8:00 pm!

If you had a TV in the 80s and 90s, there’s a good chance John Tesh was on it at one time or another: maybe as the host of Entertainment Tonight, or the Olympics, or the Tour de France, or maybe playing in the rain during his widely acclaimed Live at Red Rock concert on PBS.

Over the past 30+ years, John Tesh’s exciting career has spanned newscasting to sportscasting, composing theme songs to hosting his own radio show – and everything in between.

“A lot of it is just sort of saying yes and just going. When I was 20 years old, I wanted to be a musician, I wanted to be a performer my whole life even though I wasn’t comfortable doing it, it was just something that was in me,” Tesh told Christian Wolf during the TOCA Backstage Podcast.

From Stage Fright to Spotlight

But being a star didn’t come easily to Tesh, although he had a talent for music. He was awkward and felt like he didn’t fit in anywhere.

“I was horribly unpopular…When I was in junior high school, I was 6’6” and I weighed 155, and I had braces, and I smelled like Clearisil because I had acne, so really, the only thing for me to do was to play piano and study trumpet and be a band geek, which ended up being a big blessing for me. I learned what focus, deep work, practice was, and it’s stayed with me,” he said.

Although he had talent and a deep rooted desire to entertain, Tesh battled with crippling stage fright.

“I tried to muscle my way through it, but that didn’t work…it followed me all the way through college, even though I was playing garage bands all through high school…when I got out of college, I realized I wasn’t going to be able to tour or do anything if I didn’t get rid of it. So I hired a guy who specializes in stage fright, and he worked with me for two years, some basic techniques. Things like practicing failing, making mistakes and how you’re going to get out of it…and the other thing, I still use this technique to this day…when you come to the show and you sit in one of the seats, I will have sat in that seat. I sit in all the seats, I meet everybody in the concert hall, all the stagehands, the people who sell the tickets…so that’s my living room, like you’re coming into my house, so when I walk out on stage, I’m totally comfortable,” Tesh said. “There is life on the other side of stage fright!”

An “All In” Mentality

Despite his stage fright, Tesh still knew in his heart of hearts that he wanted to be a performer. Even when he went off to college to study textile chemistry (his father’s choice, not his), Tesh felt pulled towards the spotlight. His junior year in college he took a radio television class and loved it. It felt right and he knew this was what he wanted to do.

After forging a professor’s signature on a form while trying to switch majors mid-semester, Tesh ended up suspended from the university indefinitely – and thrown out of the house.

Then he did what any determined 20 year with nothing to lose would do: he made a fake radio demo tape in the hopes of getting hired at the local station.

“[It’s like] Cortez, when you’ve burned your ships and you only have one choice, you have to go. That spirit of risk is what caused me to say yes, to…going to sports even though I knew nothing about sports, yes to Entertainment Tonight even though they only gave me a 13 week contract, and then yes to starting the radio show. Because what’s the worst that could happen?” Tesh said.

And it worked. The station manager saw Tesh’s work ethic and determination – and gave him a job as a janitor. Since then Tesh has steadily worked his way up the ranks, often leaning into the unknown and taking paths even when he didn’t know where they would lead him.

These days Tesh keeps busy hosting his own syndicated radio show/podcast with his wife Connie, and son Gib called Intelligence for Your Life. He’s also in the process of writing his memoir for publisher Harper Collins. And he continues to perform in concerts all around the country, including his upcoming Acoustic Christmas Concert right here in Torrance!

John Tesh’s Acoustic Christmas Concert isn’t your average holiday program. Yes, there will be music, and an abundance of holiday cheer, but there will be some interesting, personal touches, too.

“What you’re going to see on stage is pretty much what you would see if you were to come here for Thanksgiving or Christmas at my house. My son, Gib, will be with us, he plays the ukulele and he’s a comedian. Prima, my daughter, who’s 25, is a ballet and modern dancer, she’ll be dancing with us…so you’ll really see Christmas in my living room on stage. We do some spoken word stuff, something we call an Old School Christmas, so it’s really a baby boomer Christmas,” Tesh said.

John Tesh will be performing his Acoustic Christmas Concert at the Armstrong Theatre on Friday, December 6th at 8:00 pm. Come celebrate the season with this extraordinary performer!

Don’t miss out on this chance to ring in the holiday season with this one-of-a-kind concert experience!

Get Tickets to See John Tesh!