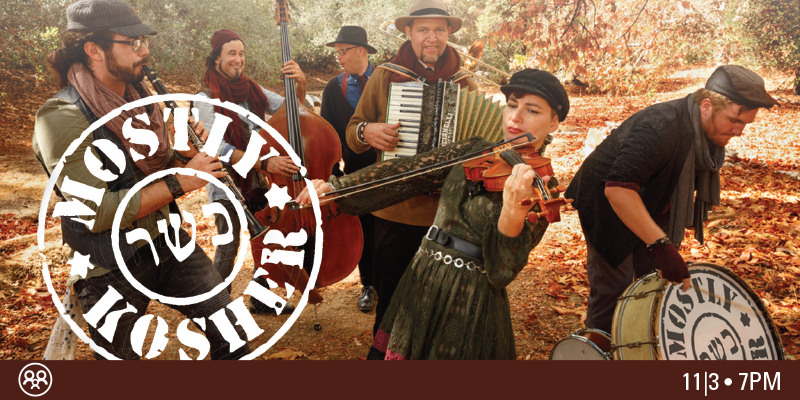 Reserve your seat to this one-of-a-kind performance on Sunday, November 3, 2019, by clicking here!

If you’ve ever heard the plaintive wail of a clarinet slicing sinuously through the air coupled with the rhythmic thump of a stand up bass, the deep throated moan of a trombone, and the quivering, piercing notes of a violin, chances are you were hearing the Jewish folk music known as klezmer.

At the same time joyous and mournful, klezmer bands have been the live entertainment for weddings and bar mitzvahs for generations.

As the years have gone on and Jewish families have emigrated to countries all around the world, klezmer music has evolved, giving rise to a new wave of talented musicians who have taken the old, traditional music and given it a new, exciting twist.

One such musician is artist Leeav Sofer, founder of Mostly Kosher, a modern Jewish cultural revival band. Mostly Kosher is a “musical feast that explodes into a global food-fight of jazz, latin, rock, hip hop, and folk,” turning klezmer music on its head and breathing new life into a beloved, if misunderstood, genre.

Leeav’s early life was filled with music. His mother is a cantor for their synagogue and the songs of the Jewish faith are inextricably intertwined with his childhood. At the age of five Leeav began taking piano lessons – and hated it. He hated it so much that he threw tantrums until he was finally allowed to quit.

But a few short years later, in fifth grade, Leeav decided to take up an instrument again, this time the clarinet. He stuck with music all through middle and high school, going between the piano and clarinet, and eventually found himself with a full scholarship to Cal State Long Beach. Finally, in Long Beach, he felt at home, musically. “If I hadn’t gone to CSULB, I wouldn’t have been able to figure out what I’m capable of,” Leeav said.

It was during his time in college that Leeav formed his band Mostly Kosher – quite by accident. He was playing piano for a wedding when he was approached by an older woman. When asked if he knew klezmer and had a band, he responded like any musician who wants to book a gig, “Of course!”

The fact that he had never played klezmer music, much less had a band, didn’t phase him one bit. “Being in college is all about studying what you don’t know,” Leeav said. “I decided to focus on it like I was putting together a recital. I called all my classmates who were talented Jewish musicians, then moved on to the non-Jews. I found mentors, researched the music, and put a band together. I thought it would be done after that, but then the phone started ringing, I was getting emails, and soon we were booked for more weddings and bar mitzvahs!”

Before he knew it, Mostly Kosher was taking off.

Leeav and Mostly Kosher want to break down the boundaries that have been keeping traditional Jewish music out of the mainstream. “This cultural music is important, but I feel like it’s our job to refresh and revive it. Well, the mission is more like this: First, to keep the music alive, and second, to lay down the drawbridge and let everybody in. This music is like cultural rock, why aren’t more people listening to it?” Leeav said.

Going back centuries, klezmer music was always a big part of the Jewish community. It is the music of celebration, as instruments were only allowed during weddings. It’s woven into the vast tapestry that is the Jewish culture, as much a part of worldwide communities as samba or taiko drums.

To this day Leeav strives to give back to his community through music. He works as a teaching artist at Colburn School in LA, bringing music and musical scholarships to Title 1 schools; he started a Jewish Youth Orchestra in the San Gabriel Valley; and is also working to build a non-profit called the Urban Voices Project, a music program that brings music education and music therapy courses to Skid Row for homeless men and women.

“I’ve always liked to be involved, always wanted to do more. I came from a privileged background and I’ve always donated when I was able to. When I started the Jewish Youth Orchestra, I felt like this was a way to change kids’ lives, to do something special and give back to the community,” Leeav said. “Urban Voices started as an eight-week project for Colburn, and when the time was I up, I didn’t want to stop. Now we’re on the verge of becoming a full-fledged non-profit. It’s everyone’s responsibility to do something.”

Mostly Kosher has been busy since they last performed at the Armstrong Theatre. They’ve been coming up with new, innovative ways to infuse traditional Jewish folk music with modern themes. The result is resonant blending of the past with the present, music that’s sure to speak for those who can’t speak for themselves.

“At our last concert in TOCA, there was a lot of diversity, kind of like a trip around the world with our music. What’s different this year is that a lot of the new music we’ve done has a voice of social justice… A new experiment we’ve been doing is writing a lot of new original songs with original lyrics and original concepts, but merging it with either traditional melodies or using traditional Jewish language poetry or verses to pull the content from, so the pieces are merging with it or responding to it. In that way it kind of brings the stories into the future but tie in with what’s going on today,” Leeav said during a recent TOCA Backstage interview.

He continued, “We have songs about mental health, people who might be vulnerable, commentary on LA’s homelessness. It’s the same thing folk music has always done, which is it has been a voice for those who don’t have one. So that’s what we’re bringing to the music this year and we’re excited about that”

Tickets to see Mostly Kosher at the James R. Armstrong Theatre on Sunday, November 3, 2019, at 7:00 pm are available now. Don’t miss your chance to experience a new take on klezmer music with talented, young musicians.

Get Tickets for Mostly Kosher