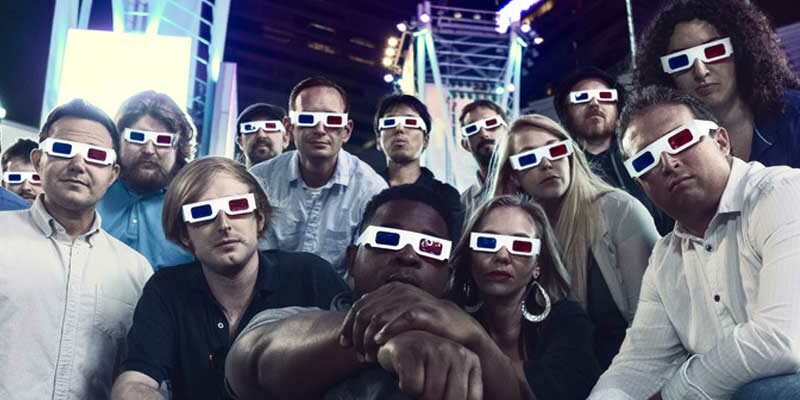 Reserve your seat to this one-of-a-kind performance on Fri, Jan 5, or Sat, Jan 6, by clicking here!

As the saying goes, you can never step in the same river twice. Sure, it might technically be considered the same river for the sake of maps and geography, but as the water rushes by ever seaward, it’s not truly the same river, the same drops of water, as before.

The same is true when it comes to jazz. Even with the same band of talented musicians, even if technically playing the same song set, you’re not hearing it in exactly the same way each time. Jazz musicians feed off one another every minute that they play, communicating subtle changes in a nearly imperceptible way.

That’s exactly how R.W. Enoch, founder, saxophonist, and musical director of the jazz fusion band Urban Renewal Project, approaches music and performances. “Every time we play, the music is unique. There’s a connection – between the audience, between the musicians on stage – that makes every performance different. There are random things, little flaws, that mean it’s different, but beautiful,” he said. “It’s the flaws in the art that make it beautiful.”

Urban Renewal Project, R.W.’s labor of love for the past eight years, is a band like nothing you’ve ever heard. They are a captivating mix of jazz, soul, hip hop, and funk, playing instruments straight out of the big band era in unique and utterly astonishing ways. They fuse the energy, fire, and improvisation of jazz and funk with the more modern techniques of hip hop and pop music.

It All Started in Virginia

R.W. is originally from VA. His foray into jazz was almost entirely accidental. His school was recruiting students to join the band/orchestra, calling the homes of students to gauge their interest. It was on one fateful evening that R.W.’s mother answered that call, shouting into the next room, “You want to join the band?” R.W.’s response? “Sure.”

When asked to choose an instrument R.W. picked the only orchestral instrument he could remember: the saxophone. He started taking lessons and fell totally in love with the music and his instrument. He knew quickly that this was exactly what he wanted to do with his life.

The original idea for URP came to R.W. during his senior year in high school. His school was putting on its first ever talent show, and R.W. saw an opportunity to expose the student body to jazz. He and his jazz bandmates put together a performance of Maroon 5’s “She Will Be Loved” with big band/jazz stylings. They performed to rave reviews from their fellow students. R.W. saw there was an opportunity to make jazz more accessible to people by fusing it with other popular forms of music, like hip hop, soul, funk, and pop.

And so the seeds for URP were planted.

After graduating from Princeton in 2009, R.W. made the decision to move across the country to Los Angeles.

“I had spent a summer in NY and a summer in LA. NY is legendary for jazz scene, which is still true, but I got impression that if I wanted to make a living as a jazz musician, LA had more work opportunities. In LA there are all kinds of music: Latin American music, film music, TV music. There are a lot of opportunities that don’t exist in any other single location,” R.W. said.

Though he was in LA doing what he’d always dreamed about (making a living as a musician) it took R.W. some time to meet enough musicians to put together the band he’d envisioned as a high school senior. It wasn’t until a year later that he had enough people to bring in for a rehearsal. Their first official performance as URP happened in November of 2010, and ever since then not a month goes by where they’re not performing.

As R.W. and the other members of URP have spent more time together rehearsing and performing, the sound and vision of a big band with funk and soul has gelled and solidified.

“For the first few years it was like I was trying to communicate an idea, but the other musicians weren’t quite sure about it. Now that we’ve been playing together more and more with the same people, we all have a better fundamental understanding about what works and how to bring that to the songs and set,” R.W. said.

Since he first came up with the idea for the band, R.W. knew he wanted to work with a rapper. He saw a gap in the music industry when it came to jazz – there wasn’t really anyone doing what he wanted to do.

It took a few tries before R.W. found a rapper who felt like the right fit for URP. R.W. wanted someone who could get up in front of the band and spit some lyrics on top of the music. And finally, in 2011, R.W. met freestyle/battle rapper virtuoso Elmer Demond.

Originally from Kansas City, Elmer grew up listening to hip hop and R&B. He started rapping at a young age, trying to impress his older sister. When she was not impressed, he only worked harder, practicing constantly to get better at his craft. He knew he had come into his own when he challenged another local freestyle rapper to a battle – and the battle lasted over three hours and ended in a tie.

From their very first meeting, R.W. knew that Elmer was the right fit for URP. Elmer came to the audition and blew R.W. away with his freestyle lyrics – lyrics that he couldn’t quite recreate exactly when they ran through the song a second time. But that, it turned out, was exactly what R.W. was looking for.

“I knew right then that we could play new music, and I could leave some space in the arrangement for the rap,” R.W. said.

The band also has a vocalist, Alex Nester. Her smoky vocal stylings and jazzy sensibility are another perfect fit with URP’s unique musical arrangements.

So far 2017 has been a big year for URP: they’ve honed in on what works in their musical arrangements and vocal elements and they recently signed with independent jazz label, Fastrac Records. It feels like things are falling into place for this one-of-a-kind band. Come check them out for yourself!

Don’t miss your chance to experience Urban Renewal Project for yourself as part of the Torrance Cultural Arts Foundation’s Studio Cabaret series! Relax in the intimate setting of the George Nakano Theatre and enjoy a delicious dinner from Chef Peter Carpenter of Gourmet to You. The menu will include chicken provencal, roasted red potatoes with rosemary, and grilled carrot and fennel salad. And don’t forget to stop by the lobby for a tasty treat from the Torrance Bakery during intermission!