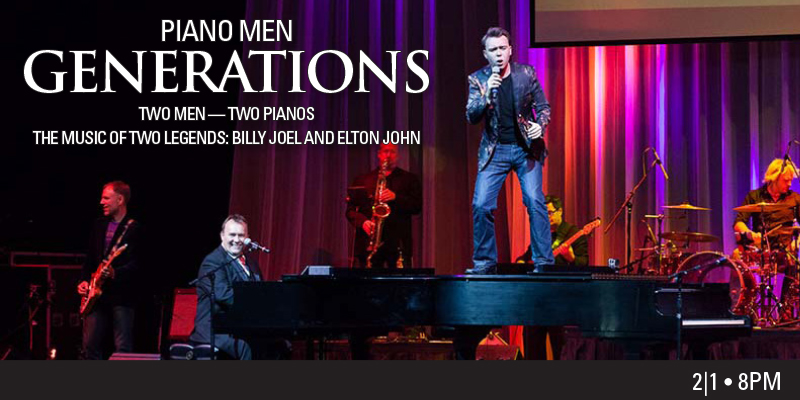 On paper, Nick and Terry Davies have a lot more in common with one another than Billy Joel and Elton John. Not only do they share a love of music and talent for playing the piano, but as father and son, they’ve got genes in common, too!

Nick grew up listening to his mother and father’s record collection – which heavily featured albums by Elton John and Billy Joel. Nick fell in love with the music, eventually taking up piano in order to play the songs he felt so connected to.

Now Terry and Nick have created a show that brings father and son together on stage to play the songs of two music legends: Piano Men: Generations. The Music of Billy Joel and Elton John.

“My dad and my mom both raised me with Billy Joel and Elton John. Billy Joel has been my number one idol of all time, and Elton John as well. Billy’s lyrics and Elton’s music are just incredible. When we decided we were putting this show together, more than other shows I’ve been in in the past, this one I really felt a connection to; especially doing it with this guy,” Nick told TOCA Backstage.

“For me it was the opportunity to jump on stage for a couple of hours and perform with my son, and the band…that whole experience as a father, is enhanced by the fact that we both love the music. Kind of an easy choice, a natural choice,” Terry added.

How do you put the music of two different musicians into the same show? When it comes to Billy Joel and Elton John, it’s not as difficult as you might think.

“Well they’re both classic rock, so that helps, but both of them, lyrically, speak to you on a different level. A lot of people I know who are also Billy Joel fans have said that Billy Joel has written the soundtrack for their life. Both of their music is so relatable, lyrically. Billy Joel’s lyrics are incredible, and Bernie Taupin who wrote the lyrics for Elton John, they both write such relatable content. And their music is just so catchy! I think the combination of those two things make them perfect together,” Nick said.

To bring a show celebrating the music of Billy Joel and Elton John to life, Terry and Nick have pulled out all the stops. In addition to two pianos on stage, they have a five piece band, and three backup singers.

The result is an out-of-this-world live performance of many of the most beloved songs of the past four decades.

With so many songs to pick from, deciding which ones to put in the show, and which didn’t make the cut, was not easy an easy task – especially for two super fans.

“The hardest part of putting the show together was [choosing which songs]….a lot of the show is the hits that everyone knows. We kinda knew that in terms of audience that we’d have to go through all the most popular songs. And even if you stick to the hits alone, an hour and a half is not enough to fit them all in. We put together a couple of medleys that have a bunch of the hits in them, we tried to fit as many of them as possible into the show,” Nick said.

And, unfortunately, that means not every song makes it into the show.

“There’s a lot of material to go at. In a two hour show, whether it’s in a medley or the full song or a request, we usually get out 35-40 songs. That’s a lot to hit,” Terry said.

“That’s why we include a request part of the show,” Nick added. “This guy [referring to Terry], I don’t know how he does it, but he can hear the title of a song and is able to play the entire thing without practice. For the most part if somebody yells out a song, we can play our way through it.”

Though they perform the songs of two very popular musicians, and they do their best to stay true to the originals, neither Nick nor Terry are trying to impersonate Elton John or Billy Joel.

“When we put the show together, we went into it knowing that no matter what we do, we’re not going to be Billy Joel or Elton John. There is no way we’re going to reach that level. Rather than pretending to be them, we have our own individual personality, we’re ourselves on stage, and so far that’s carrying us as far as we want it to carry us,” Nick said.

As for what the future holds for these two piano men, only time will tell. Nick is producing and touring his own shows, and he recently finished recording his debut album (called My Generation) at Abbey Road Studios in London.

But really, what it comes down to is that both Terry and Nick love what they do. They love to perform the songs of Billy Joel and Elton John, and, as long as they love it, they’re not going to stop.

“Everything I do is fun to be honest. I’m at that age where whatever I’m gonna do I’m gonna enjoy it. Look, being on stage with Nick and the band, if I can still sing in five years, I’m still gonna to be up there,” Terry said.

If you love the music of Billy Joel and Elton John, then you won’t want to miss Piano Men: Generations! Tickets for the show on Saturday, February 1, 2020, at 8:00 pm are on sale now for. We hope you’ll join us, just the way you are!

Get Tickets to Piano Men: Generations!