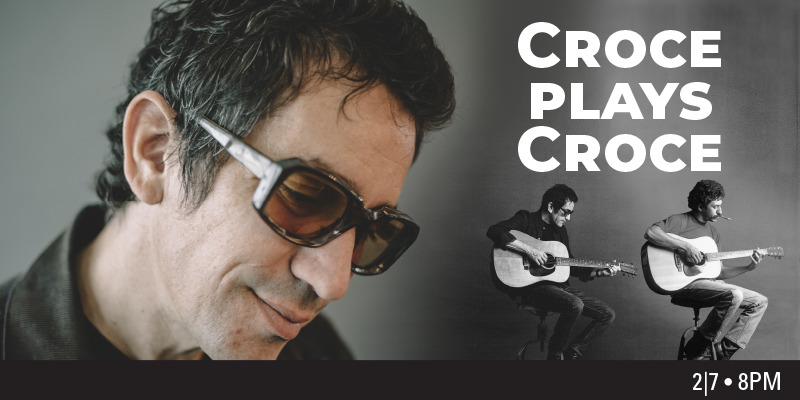 From a young age, AJ Croce knew he wanted to be a musician.

That he felt called to this particular path comes as no surprise; after all, he’s the only son of 70s singer-songwriter Jim Croce.

Now, more than 40 years after AJ first sat down at the piano, he’s built a 30+ year music career his father would have aspired to.

Though he’s passionately followed his musical destiny, and built a career playing the music he loves, AJ is no stranger to tragedy. When he was a mere toddler, tragedy struck, twice, changing his young life forever.

AJ was two years old when his father died unexpectedly in a plane crash, cutting short his budding career and growing family. Then, a year or two later, AJ completely lost his sight due to brain tumor syndrome (luckily, he later regained sight in one eye).

But that didn’t dampen AJ’s desire to learn about and play music.

He dove into his father’s record collection, focusing on Ray Charles and Stevie Wonder because both, like him, had lost their ability to see.

One day, AJ decided he wanted to learn how to play the piano, just like Ray Charles. But he didn’t take lessons to accomplish this goal. Instead, he sat down at the piano and doggedly figured out how to play Ray Charles’s songs.

He was just six years old.

Once he mastered Ray Charles’s, songs he moved on to more difficult music, including blue scales. Young AJ wrote songs and tinkered on the piano for hours upon hours a day. He listened to other Blues pianists, working hard to get his left hand to play independent of his right.

As a teenager he started playing piano regularly in clubs and shows, gigging around with other musicians. He then dropped out of high school and recorded a song with Cowboy Jack Clements – which found its way to blues icon BB King. Within a year, at 18, BB King had hired AJ to tour with him.

From there, AJ played with many more music icons (like Allen Touissant) and started recording his own music. Though AJ is an accomplished blues pianist he doesn’t limit himself to staying inside that particular box. His music is rich with elements of jazz, soul, rock’n’roll – and even a little bit of pop.

Now, as he approaches his 50s, with a career that has spanned more than three decades, and includes recording 10 studio albums, AJ is honoring his musical roots with his show Croce Plays Croce.

This show is like a conversation between father and son. AJ plays his own original music, his father’s music, as well as music from albums and artists that have influenced both he and his father’s musical journey.

“Croce Plays Croce is really a tribute to the connection between my father and I and our influences. I grew up listening to his record collection. I was more influenced by it than I was him. That’s not saying I didn’t love his music but as a kid I lost my sight and I got turned on to Ray Charles, Stevie Wonder…When I play this show, I play my father songs that people know and I play my music that connects to it in one fashion or another, then I play the music that really inspired both of us,” AJ told ListenIowa in July of 2019.

Tickets for Croce play Croce, on Friday, February 7, 2020 at 8pm, are still available, but almost sold out. If you’d like the chance to see AJ play his original songs, and his father songs, along with the artists who influenced them, get your tickets before they’re gone!

Get Tickets to Croce Plays Croce