Release Your Inner Howl with Call of the Wild: Illustrated Edition! 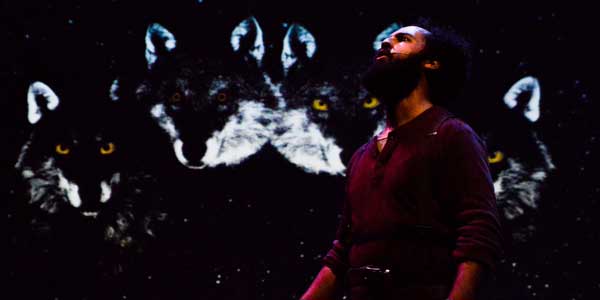 We all have a book. That one book we read during childhood that really jumped off the page and into our imaginations. A book that, once you picked it up, you couldn’t put it down; a book you’d return to time and time again.

We all have that one book, the story etched so completely into our memory we could almost recite it by heart.

“When I was a kid, this was my favorite book. I got into theater reading books out loud. I would reading this story out loud in my room, and my mom would knock on the door asking ‘what’s going on in there?’ So when we thought about what story would work for…people at a kind of a crossroads, like middle schoolers, what story would inspire them and challenge them and scare them and make them laugh, make them cry, I immediately went to Call of the Wild,” Noel told TOCA Executive Director, Chris Wolf.

New Retelling of a Classic

Call of the Wild: Illustrated Edition brings the beloved story by Jack London to life on stage – in interesting and unexpected ways.

“In telling the story, we wanted to keep it simple and really focus on the story and the experience that you have when you read the book. And I think what’s important when reading the book is you use your imagination. So when it’s just me you have to imagine all the dogs, and all the characters, and all the places we go. I think the audience participates in a more active way than if we gave them everything,” Noel said.

An Actor Forges His Own Path

Noel and his co-creator, Jason Trembly, came up with the idea for the show when they had spent 10 years working the theater scene in Austin. Rather than continue down the same stale path, Noel and Jason decided to create their own opportunity, using the book Noel had loved so much as a youth.

“Four years ago, we decided to take this on. We took a year and adapted the story. We had to decide what parts of the story we wanted to focus on. We did a workshop for about 600 kids, and just showed them half of it. Most of the feedback we got was that they wanted more dog acting! I was surprised. They want to latch onto Buck and his story,” said Noel

For another year Noel and Jason worked on the second half of the new show. Then, finally, in 2016 they debuted Call of the Wild: Illustrated Edition in Austin and it’s been full steam ahead ever since. Noel and his crew have been touring with the show for the past two years, sharing the story of Buck, and bringing out the howl in audiences all over the country.

“I thought catering to a middle school audience would be hard, but it’s been great, they love it! They latch onto it immediately. I think part of it is that the centerpiece of the story is a dog. There’s something about Buck that kids really empathize with. They’re not high schoolers yet, they’re at a crossroads where they’re looking for what they care about what they want to do what they’re into. It’s really special to see them light up when they experience this story,” Noel said.

Next Up: Another Classic

Noel’s next project is just as ambitious as his first. He’s working on a musical adaptation of the story of Hansel and Gretel, called, simply, Gretel.

“This is a bit of a bigger show, with three actors, a live cellist and live guitarist, and one screen. Similar aesthetic, a little bit bigger, but still focusing on a classic story that we all know, that we’re telling a little bit differently,” Noel said.

At heart Noel considers himself a storyteller. He started performing by reading aloud to himself in his room, and turned that into a career sharing stories with others.

“If you love a good story, if you know this book, and even if you don’t, come to the theater and really experience this story. It’s an entire theatrical experience. From the sound design, to the projections, talk about a work of art! There’s original music, you really get lost in the story. It may be a one-man show, but it really is a high-production theatrical experience,” said Noel.

Howl along with Noel and Buck during this high-quality, theatrical production of Call of the Wild: Illustrated Edition. Plus, come early or stay late to do an art project with Art to Grow On! Tickets are still available!

Get Tickets to See Call of the Wild: Illustrated Edition!