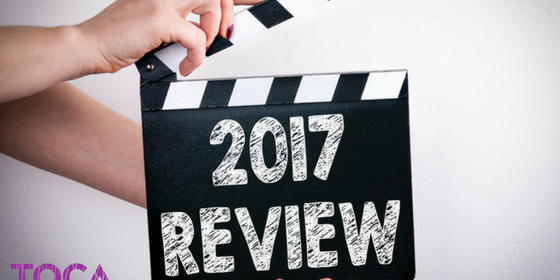 As the year slowly comes to a close, it feels natural to take time to reflect on the past 12 months.

For the Torrance Cultural Arts Foundation, 2017 was a banner year. We won awards, sold out shows, and spent time connecting with, and giving back to, our community.  Come with us on a brief walk down memory lane to see what the year held for us. 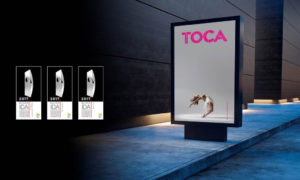 TOCA was awarded three silver IDAs in recognition of outstanding advertising, logo, and poster designs. The IDA (International Design Awards) was created in 2007 to bring awareness and recognition to graphic design that “packs a punch” and “makes a statement.” 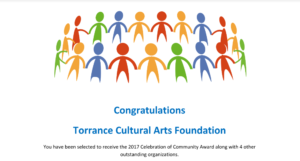 In June TOCA was honored by Torrance Mayor Pat Furey and the Kiwanis Club of Torrance as a recipient of the Celebration of Community Award. 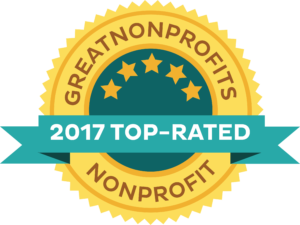 Thanks to the inspiring stories you, our community, shared, we won a spot on the 2017 Top-Rated List. The Top-Rated Nonprofit Award is based on the rating and number of reviews that TOCA received from volunteers, donors, and members of the community.

The Dee Hardison Award, named for the former mayor of Torrance, is given each year to an individual who has made a unique and valuable contribution to the performing arts community. This year we’re proud that our own President, Nancy Mannon (along with her husband George), have been presented this award from the Torrance Performing Arts Consortium.

As part of the Torrance and South Bay community, our mission has always been to “enrich the community through the performing arts by providing diverse cultural, educational, and entertainment experiences of the highest quality.”

Plus we had local celebrity Shadoe Stevens attend our Vaud & the Villains show.  Check out what he had to say:

South Bay Festival of the Arts

This year also saw our inaugural South Bay Festival of the Arts! It was an all-day, fully-immersive, fine arts experience that the entire South Bay was invited to attend. We had live performances on three stages, fine arts exhibitions and demonstrations for the whole family, raffles, arts exhibitors, and even a graffiti artist! With over 3000 people in attendance, it was a huge success – and we know the next one will be even better.

Talented South Bay residents took to the stage to show off their skills at the South Bay’s Got Talent competition! The first place winners earned a full scholarship to the 2018 World Championships of Performing Arts, and other participants received mentoring and performance opportunities right here in Torrance. Past participants worked with fan favorite Joel Gaines, and 2016 winner, LACEI, got to open for Casey Abrams in November.

Dancing With the South Bay Stars

Another way our friends and neighbors got to get up on stage was through Dancing With the South Bay Stars. Residents of the South Bay received training from seasoned dance professionals and raised money for local charities. The next crop of South Bay dancers is gearing up for the 2018 show right now!

True Tales From the South Bay

True Tales was a show that featured our neighbors from the South Bay sharing stories and experiences about their real life events. Any type of story was welcome; the only requirement was that the story be no longer than six minutes. We had some amazing stories and storytellers, and we’re looking forward to hearing more in 2018!

The third annual Pacific Coast International Short Film Fest took place in April, and we had dozens of filmmakers from all over the world submit amazing short films. We’ve loved giving up-and-coming filmmakers a platform to share their art over the past few years.

TOCA Executive Director, Christian Wolf, volunteered for a few different mentoring opportunities in 2017. He wanted to help professionals figure out what steps to take next and focus on attainable goals. Christian helped mentor three different people, all with their businesses and careers, and all within the performing arts or nonprofit space.

As you can see, it’s been quite a year for us at the Torrance Cultural Arts Foundation! And 2018 is looking even better. We can’t wait to see what the coming year has in store!