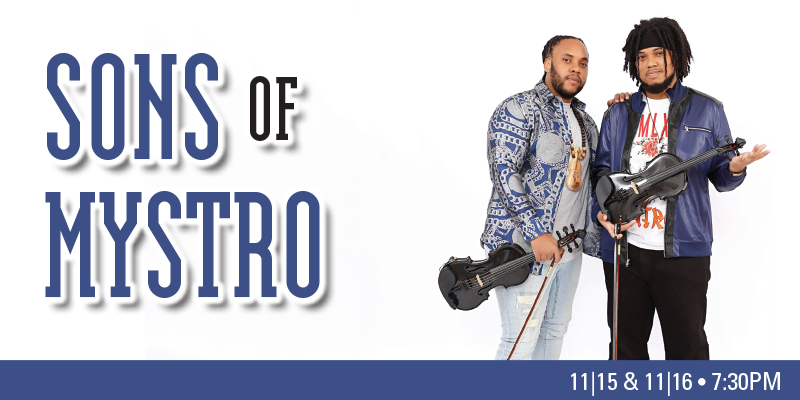 Learning to play an instrument is a kind of rite of passage for childhood. Some kids are forced into it by well-meaning parents. Some kids are drawn to playing music because they grew up with it.

In the case of Malcolm McNeish, one half of the Sons of Mystro violin duo, he started playing the violin because he wanted to go on field trips.

“In 3rd grade my best friend and I wanted to be in the band, but my teacher was saying that if we played in her class orchestra we could go to Disney World and Busch Gardens, and I wanted to go there, so I picked her class, and I’ve been playing ever since,” Malcolm told Steve Harvey in a 2018 interview.

His little brother, Umoja, the other half of the duo, watched his sibling practicing and immediately wanted to follow in his footsteps.

“Well, originally I started playing because I saw my older brother playing and I thought ‘you know what, this is actually really dope, I might as well try and play too,’” Umoja told Steve Harvey.

Becoming the Sons of Mystro

Malcolm and Umoja practiced hard and played constantly as they grew up. Then, in 2010, during a school talent show, the duo’s potential came into the spotlight. They performed hip-hop songs during the show, and their father knew they had something special. He decided to help them form a group.

They called themselves Sons of Mystro after their father who went by DJ Mystro in clubs, where he played reggae and Carribbean beats for throngs of dancing people.

The duo played as much as they could anywhere they could, often for free, until they got their big break in 2012. That was when they were invited to play live during the pre-game introductions for a Miami Heat/LA Lakers game.

The crowd, and the NBA players, went wild during their performance, and Malcolm and Umoja have been able to have their pick of performances ever since.

Stars on the Rise

The Sons of Mystro have opened up for and/or performed with musical artists like reggae greats Marcia Griffiths and John Holt, Latin artist Tito Puente Jr, rapper Common, and American Idol winner Fantasia.

They’ve also played and collaborated with the hip-hop violin group Black Violin, they’ve appeared on an episode of Keeping Up With the Kardashians, and have even won the award for “Best Emerging Artists Under 21 Years Old” from the International Reggae and World Music Awards.

Now the Sons of Mystro are headlining shows all around the country, and they’re also working on writing/recording their own album. They’ll be at the Nakano Theatre on November 15th and 16th as part of our Studio Cabaret Series.

Sons of Mystro, Part of the Studio Cabaret Series

Sons of Mystro are next up in our Studio Cabaret Series! The Studio Cabaret Series is a way to enjoy musical talent and tasty food in an intimate setting; it’s like dinner theater for your ears! The performances are set in the George Nakano Theatre at four-seat cocktail tables. Meals for the Series this season are prepared by the talented chefs at the Red Car Brewery.

Dinner for the performances of Sons of Mystro will be caesar salad, baked rigatoni, Italian vegetables, and house-made focaccia bread. Plus goodies from the always-delicious Torrance Bakery will be available at intermission.

Tickets for Sons of Mystro On Sale Now

Malcolm and Umoja, aka the Sons of Mystro, use their violins to interpret reggae classics, American pop songs, and their own compositions, accompanied by beats, and occasionally a DJ or guitarist. Don’t miss out on seeing these violin virtuosos!

Click Here to Get Your Tickets for Sons of Mystro!